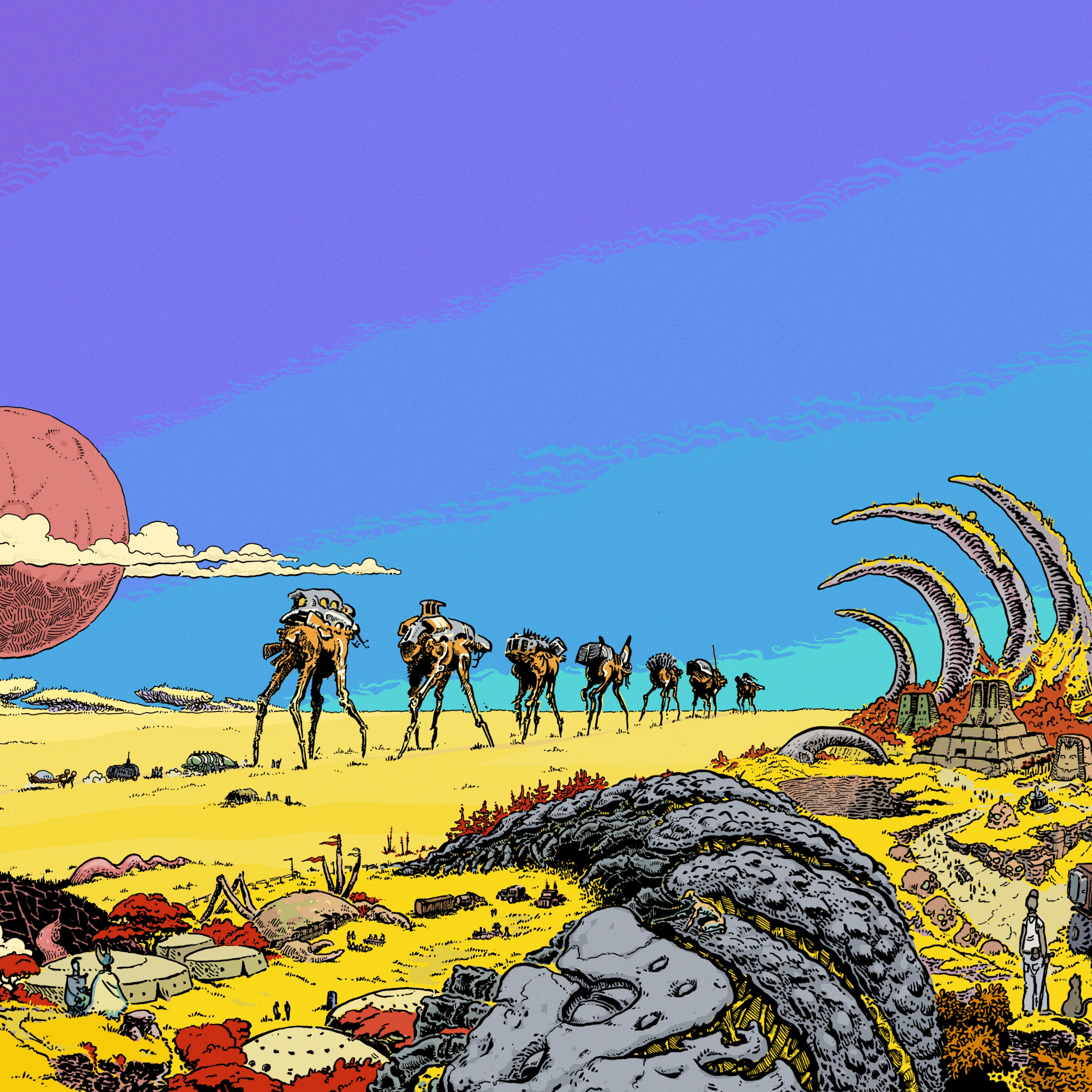 A novahot release on the TTRPG front, Ultraviolet Grasslands is a beautiful baby of several equally beautiful human (I assume) entities; mostly: writer, artist, and designer Luka Rejec (from WizardThiefFighter studio) and Exalted Funeral Press (an amazing publisher specializing in heavy metal and occult which is a recommendation on its own).

The Ultraviolet Grasslands and the Black City is a tabletop role-playing game book, half setting, half adventure, and half epic trip; inspired by psychedelic heavy metal, the Dying Earth genre, and classic Oregon Trail games. It leads a group of ‘heroes’ into the depths of a vast and mythic steppe filled with the detritus of time and space and fuzzy riffs.

Kickstarter description by whoever wrote it.

The book is written and designed by Luka (who’s a powerhouse of many talents) but the Kickstarter to release a proper hardcover version of it was so successful, they decided to call in reinforcements.

That would be me.

Welcome to the Black City

Part of the whole Ultraviolet Grasslands endeavour is a set of postcards. When Luka asked me to prepare a set of ten postcards and a template to make more of them, we had a long, long discussion about the general vibe of those. Recalling it here in full:

Something that fits in with the mood of the UVG and the idea of strange lands and times clashing … maybe recalling 1970s / 1980s postcards a bit. (…) You can add some cheesy slogans to them, if you think it will fit.

Luka, in his briefing glory

Starting with the research of postcards of the era (Luka meant American postcards, and they’re stylistically far removed from what was published back then in Slovenia where he’s from and Poland where I’m from), I put together a moodboard of vintage and retro postcards to work as references.

Figuring we need two templates to show off Luka’s art, I prepared a vertical and horizontal version of the back – let me tell you, vertical postcards are not a viable thing for real-life postage but they sure look amazing.

Here’s a sample of the postcards made in between Luka and me: Luka’s art and writing inserted into templates prepared by me in Affinity Publisher, spiced with whimsical fonts and a slightly ridiculous vibe of a psychedelic world.

In the end, we ended up making ten postcards, and I kinda want them on my wall.

Get lost on the road to Black City

Or don’t. If it’s not something you’d like, we got a map for you.

One of the stretch goals of the campaign was making a accordion-folded map of the setting, helping the players during their Oregon Trail-style travel.

As with the postcards, the map art was already prepared by Luka – the map is featured in the book in sections; my task was to put it all together into one big map, and make sure it’s pretty – which mostly included creating the ornamental border.

Keeping with the colour scheme of UVG, I started drawing the border.

Luka had the idea of a scroll map, somewhat resembling the Asian silk paintings. With a silky texture, I’ve managed to achieve a similar effect, but to keep it more European, it was afterwards treated with watercolours, not ink, and slightly occult-ish symbols of sacred geometry. The light lines – solid, dashed, and dotted – harmonize with the same type of linework comprising most of the map.

Ultraviolet Grasslands is one of the first projects on which Luka, Matt and I managed to work together – but definitely not the last. (We’re already on our fourth).

Looking forward to more heavy metal in my life.