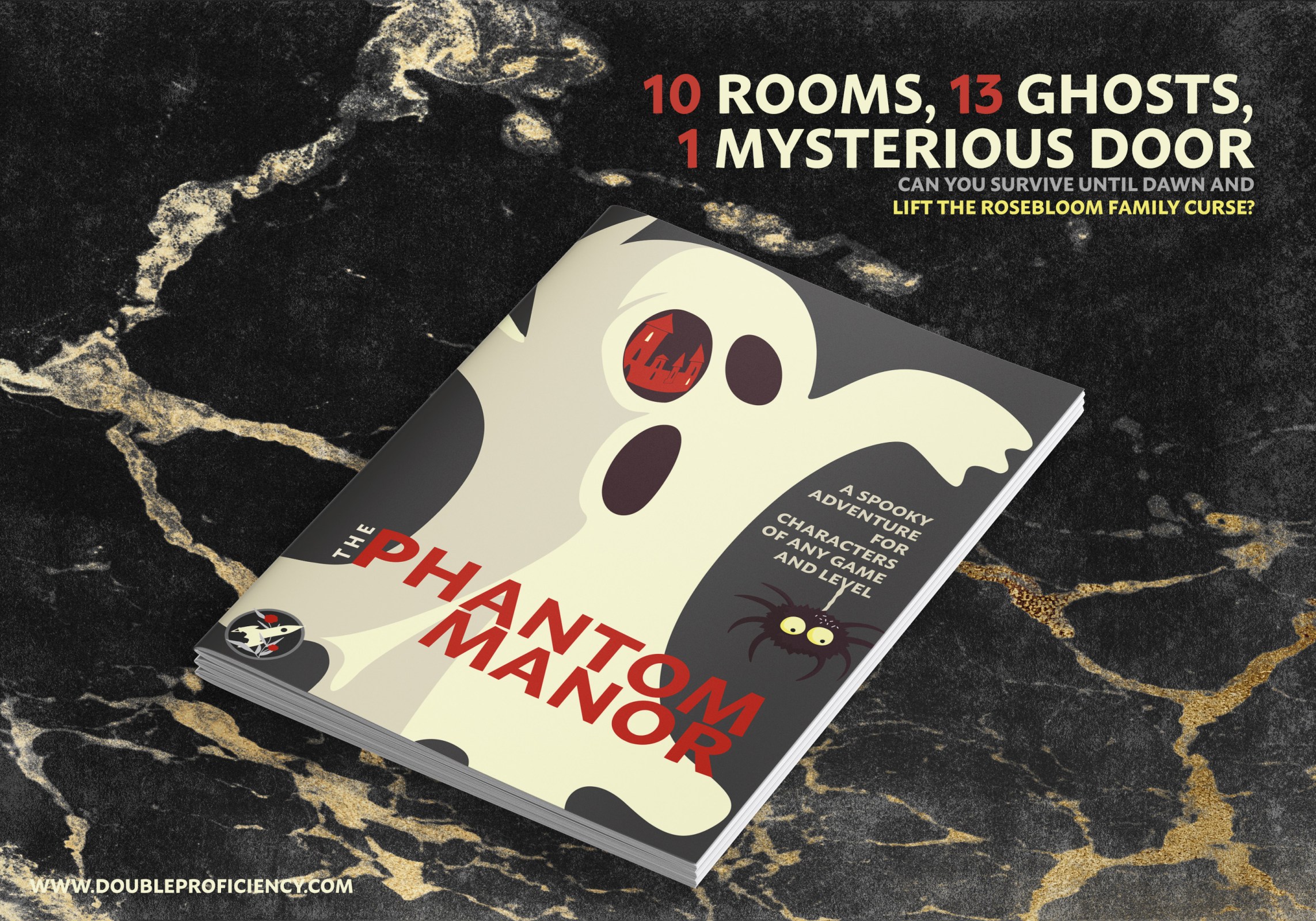 10 rooms, 13 ghosts, and a mysterious door in the Phantom Manor. Can the adventurers survive until dawn, lift a family curse, and get a new—albeit haunted—house for themselves?

The Phantom Manor is a 40-page adventure fit for adventurers of any game and level. Written by Jakub Wisz and laid out by Anna Urbanek, the adventure continues Double Proficiency’s tradition of most-ages-appropriate content (let’s say, 7+), with little to no mechanics, and focus on creating memorable non-combat encounters.

This haunted mansion adventure can be used in any fantasy setting, including D&D 5e and Pathfinder, but will also work in modern and horror settings with minor changes.

Welcome to the Phantom Manor

This adventure contains everything you need to play except for the rules, as those will come from the game you’re playing. It’s built as a short, spooky story with a slight comedic undertone, with replayability value and an interesting reward adding depth to your party’s downtime activities.

The Phantom Manor’s theme is gothic horror, though it doesn’t introduce gory or particularly unsettling concepts on its own—it’s up to the party and their GM to decide how scary they want to make it. The story is presented through visual storytelling and clues left by the previous denizens, leaving plenty of narrative room for game masters to fill in to make it suit their storytelling style.

The game’s intended as a one-shot or a few game sessions, to be run as a standalone game or as a part of an ongoing campaign. The rewards are intended to add depth to your downtime activities and variety to your travels, not replace your game system’s mechanics.

The PDF version of the adventure allows the game master to keep track of the game as you play it. We have introduced drop-down boxes, check boxes, and other methods of making sure you don’t have to take separate notes as the PCs investigate the manor. They might get lost – but you will not!

Ten rooms, thirteen ghosts, and a magical door leading nobody knows where—all shrouded in the mystery of the Rosebloom family’s tragedy.

Will the adventurers find a way to break the curse—or will they fall prey to the malevolent specters inhabiting the place?

A system-agnostic gothic horror adventure for characters of any level.

Get your copy on DriveThruRPG!
Print-On-Demand version in the works!

Would you like to introduce random ghosts into the Phantom Manor? That’s what the Ghostly Apparitions deck is for!

Ghostly Apparitions is a system-agnostic and fantasy-appropriate deck of ghosts, specters, and spirits ready to use in your tabletop RPG of choice! Across 50 illustrated tarot-sized cards, you’ll find old acquaintances, lost souls, and terrifying wraiths – each complete with a sensory description, encounter, and inspiration for the story going forward.

Get your copy on DriveThruRPG!
Print-On-Demand version in the works!

Not yet, but almost here ❄️
New drawing tablet, who this?
Choices, choices.
No better time than #spooktober #inktober to get back to drawing stuff for fun after a good couple of years.
Great news! The shipping of the Herbalist's Primer starts next week! A year since the campaign ended, we have finalized the production, packed up everything, and are more than ready to ship...!
The lookout’s shout from the crow’s nest electrifies the crew. A fast pirate skimmer nears quickly, ready to ram and board you. "Jump to it!" calls the quartermaster. Engage, fly into the clouds, or take the wind out of their sails? #encounter #ttrpg #dnd #WayfarersDeck
Loading Comments...
%d bloggers like this: