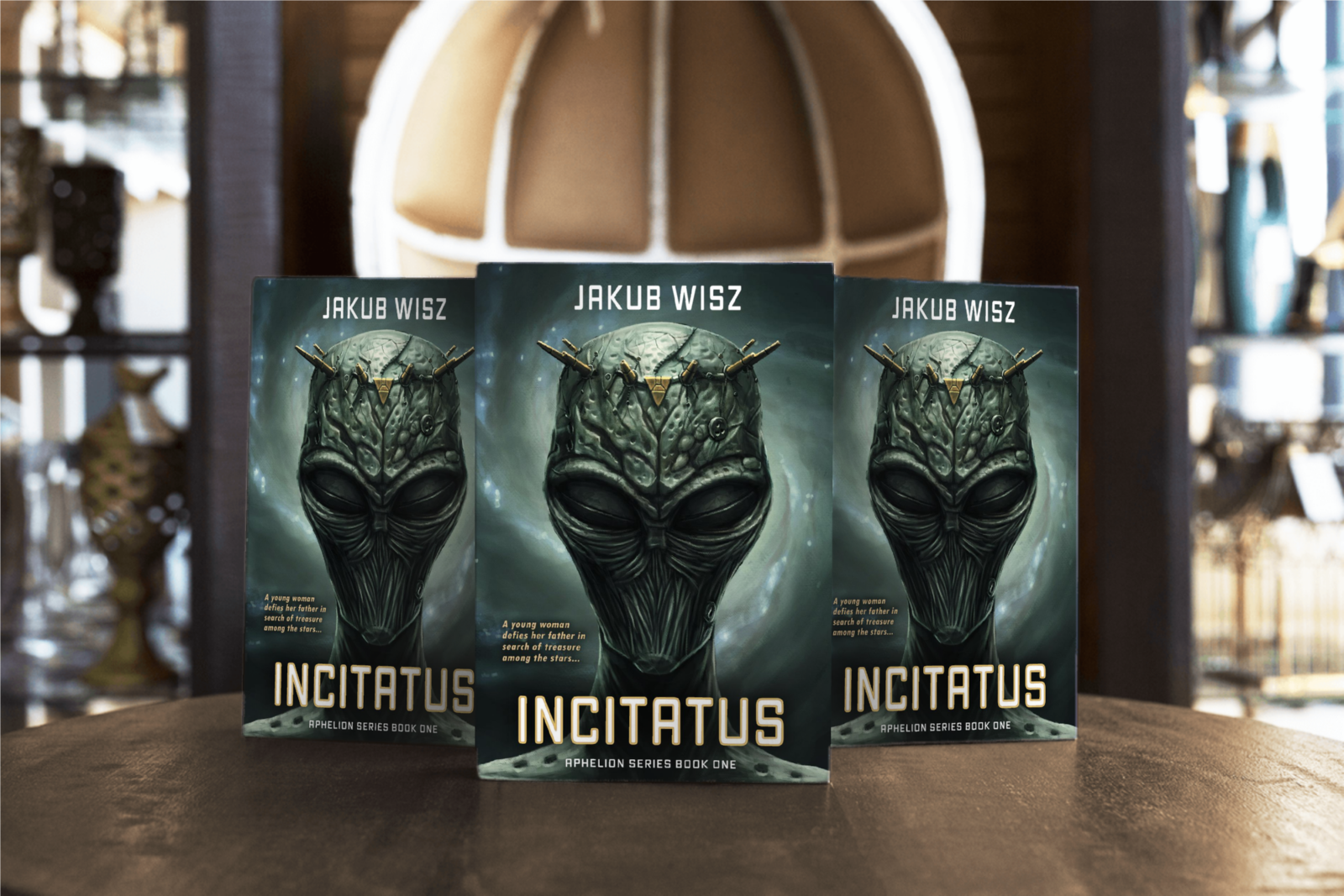 The time has come: pre-orders of Incitatus, Jakub’s sci-fi thriller, have started! Are we ultra excited about this book getting released? Like you can’t imagine – and I’m gonna tell you why.

Incitatus is available for pre-order – everywhere books are sold, basically. You can grab a paperback on Amazon, Barnes & Noble, or in other bookstores of your choice. It’s 358 pages packed with action, dread, corporate intrigue, family matters, a disaster protagonist, her girlfriend, space treasure, pirates, mercenaries, and terrifying presence on a ship that should have been empty.

Shao has two choices:
live and die the boring corporate life her father demands she live
OR go on an adventure searching for space pirate treasure.

Shao hates her boring, corporate-driven spaceship pilot job. Living up to her father’s vision for her hasn’t been easy, but she’s been a dutiful daughter. Until she discovers a data chip leading to a pirate treasure. Suddenly faced with a new path, she convinces her crew to ditch their corporate responsibilities to go on a treasure hunt instead.

Shao has no idea she’s made a huge mistake and that her crew-including her girlfriend, Mai Wren-will wind up paying for.

With forces beyond her knowledge at play, Shao stands to lose everything she holds dear. Her decisions will be her downfall and she’ll have to make tough calls that’ll forever alter her future and the lives of her crew. Some of them might not survive, but that was a choice Shao made, and she must live with the consequences… no matter what they may be.

Set in a hard sci-fi world of Aphelion, Incitatus takes place in the near future, after humanity colonized the entire Solar System, and technology blurred the lines between humans and machines.

The book is full of action, conflicting interests, intrigue, and fear of the unknown, both in the outside world and inside the human mind. From transhumanist themes to matters of love, individuality, and personal freedom, Incitatus is an engaging, exciting thriller for adult audience.

What’s That to You?

Well, first of all, you can pre-order the book. I promise it’s good. Grab it here.

If that’s not something you feel like doing just yet, you can sign up for the newsletter here and receive the first three chapters absolutely free straight to your inbox.

If you want the whole ebook without a wait, it’s available right now on our Patreon!

And if you like what you see, why not tell your friends about it, and dropping a rating and review on Goodreads?

Jakub has been a writer for a while. Well, about 20 years – writing for magazines (mostly in Polish), for board games, tabletop roleplaying games, and a whole bunch of ghostwriting. There’s a fair number of things he can talk about listed in his writing portfolio.

However, writing and publishing a novel is a brand new thing. Incitatus is a story born out of love for sci-fi thrillers and treasure hunts. Imagine Treasure Planet, only Aliens. It mixes a young protagonist Shao and her terrible life choices with space pirates in the lawless, landless frontier of the Oort Cloud.

I personally love this book. I’ve read it upwards of dozen times so far (editing, polishing, layout – you know), and I still will re-read it once the paperback version arrives.

The book was edited by Teresa Grabs, and the cover art drawn by Holly Humphries, by the way. They were both absolutely delightful to work with 💖.

The Beginning of a New Era

As you may have already read on our other website, Incitatus is a part of Project Aphelion. And that’s why it’s important – being Jakub’s novel debut aside. It’s where we kick off Aphelion.

We have been working on this project for years. Jakub has been working on the setting for Aphelion RPG for longer than we have known each other, actually. Even better – me volunteering to give it a read / proofread is how we started talking outside of our regular online Shadowrun game, and it is how we… uh… ended up where we are now, as partners. So, as you might imagine, Aphelion is important to us. Personal, even.

We have always intended to make this our flagship project; all nature / environment stuff just happened along the way. Here’s a quick breakdown of our plans. Expect reading much more about it.

Great news! The shipping of the Herbalist's Primer starts next week! A year since the campaign ended, we have finalized the production, packed up everything, and are more than ready to ship...!
The lookout’s shout from the crow’s nest electrifies the crew. A fast pirate skimmer nears quickly, ready to ram and board you. "Jump to it!" calls the quartermaster. Engage, fly into the clouds, or take the wind out of their sails? #encounter #ttrpg #dnd #WayfarersDeck
Support from our Patrons is the foundation of our Geologist's Primer and Aphelion projects. Patrons get content each month relating to those projects, but they also get early access to other content.
Learn about a biome, its signature plants, and a handy list of descriptors for all the senses. Now player characters can not only see but also hear, smell, taste, and feel the world around them. Devised as a quick reference for #writing or #ttrpg #dnd #pathfinder
Now available on DriveThruRPG.com https://www.drivethrurpg.com/product/406068/Wayfarers-Deck-Courtly-Whispers
What's happening here?
Loading Comments...
%d bloggers like this: