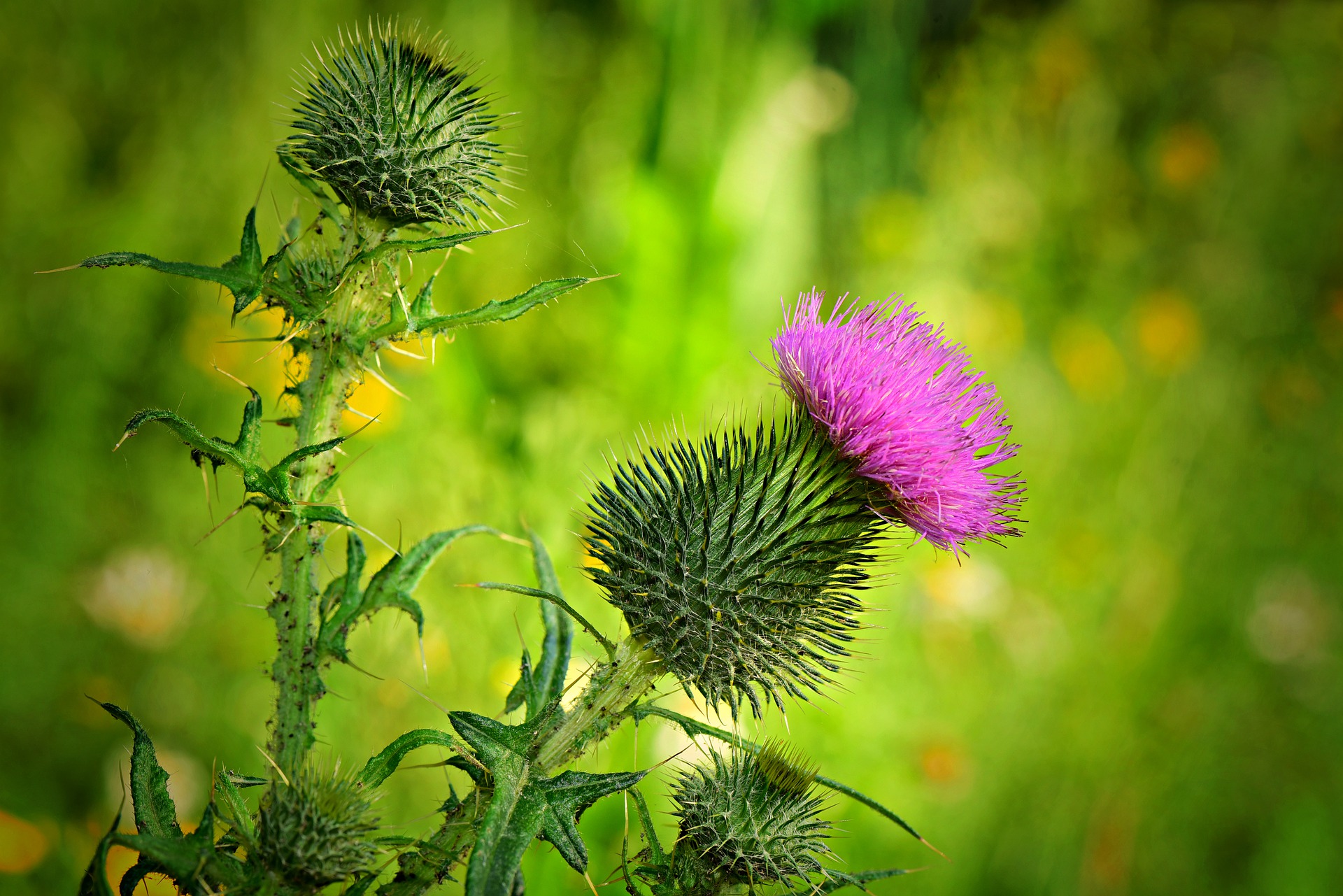 Thistles are a large group of plants, usually in the aster family, characterized by sharp prickles on the leaf margins and sometimes spreading over the rest of the plant. The prickles protect thistles from grazing herbivores, but the level of spininess depends on the species and its habitat, with thistles from arid environments growing larger prickles. The compound flowers are usually purple, turning into fluffy, downy seedheads similar to dandelions. Most thistles belong to the Carduus, Cirsium, and Onopordum genus, each encompassing dozens of species.

As a varied group, thistles have near-worldwide distribution. Some of them are considered noxious weeds and actively fought against, others are cultivated for their medicinal or ornamental value. In all cases, thistles play an important role in the local ecosystem as a source of nectar for butterflies, bumblebees, and hummingbirds. The seeds are the favorite food of goldfinches.

Wear leather gloves when handling thistle, both because of the prickles and the dermatitis they can cause in some people, like most of the Asteraceae family. Forage the leaves, roots and flowers when fully grown. For most purposes, with an exception of some magical practices, remove the prickles and use the rest fresh or dried.

All thistles in the genus Cirsium and Carduus are edible, but not many are palatable. Young leaves, striped of prickles, work in a salad, and insides of flowerbuds and flowerstalks are quite tasty, but not nutritious.

From a magical perspective, most thistles have the same powers of protection, purification, hex-breaking, and healing, except as noted below.

Grown in the garden, thistle repels thieves. Kept by the door, it wards off evil. Carry the flowerheads in the pocket as a protective amulet and portable ammunition against evil spirits. Throw one into the fire to instantly exorcise and purify the area or to deflect lightning. Clothing made from thistle fiber makes the wearer immune to curses and breaks any enchantments placed beforehand.

Thistle represents endurance, courage, and the will to survive. It adds energy and vitality, while building healthy personal boundaries. Use it for healing and recovery, especially to cure sick or wounded animals.

To call spirits, boil thistle in a cauldron in front of you. When the steam rises, ask your question and listen for the answers. Water will do, but wine strengthens the effect and makes the spirits more cooperative.

Wearing milk thistle around the neck enrages nearby snakes, pushing them into a mindless rage in which they attack anything in range, including themselves.

Thistles have somewhat of a bad reputation. A garden overgrown with thistles speaks more of neglect than of courage or protection, although the idea of a treasure hidden behind a forest of thistles makes walking through Sleeping Beauty’s briars sound like a pleasant stroll through the park. The plants have an important role in the environment, however, and deserve more love than they usually get.

They get it in Scotland. According to legend, thistle saved numerous lives during the Battle of Largs in 1263, and turned the tide of the war with the Norsemen. As the invading Norse army was about to sneak up on a Scottish encampment under the cover of darkness, one of the barefooted Norsemen stepped upon a thistle, and his pained cry cut through the night air, alerting the Scots to their enemies’ presence. Hence, thistle became the national emblem of Scotland, usually depicted with a crown upon the flowerhead. The species in question is probably common thistle (Cirsium vulgare), more than abundant in Scotland.

Milk thistle (Silybum marianum) has been considered holy, because someone thought that the milky sap had to originally be the breast milk of Virgin Mary. To each their own folklore. The medicinal properties of milk thistle are yet to be confirmed.

Great news! The shipping of the Herbalist's Primer starts next week! A year since the campaign ended, we have finalized the production, packed up everything, and are more than ready to ship...!
The lookout’s shout from the crow’s nest electrifies the crew. A fast pirate skimmer nears quickly, ready to ram and board you. "Jump to it!" calls the quartermaster. Engage, fly into the clouds, or take the wind out of their sails? #encounter #ttrpg #dnd #WayfarersDeck
Support from our Patrons is the foundation of our Geologist's Primer and Aphelion projects. Patrons get content each month relating to those projects, but they also get early access to other content.
Learn about a biome, its signature plants, and a handy list of descriptors for all the senses. Now player characters can not only see but also hear, smell, taste, and feel the world around them. Devised as a quick reference for #writing or #ttrpg #dnd #pathfinder
Now available on DriveThruRPG.com https://www.drivethrurpg.com/product/406068/Wayfarers-Deck-Courtly-Whispers
What's happening here?
Loading Comments...
%d bloggers like this: