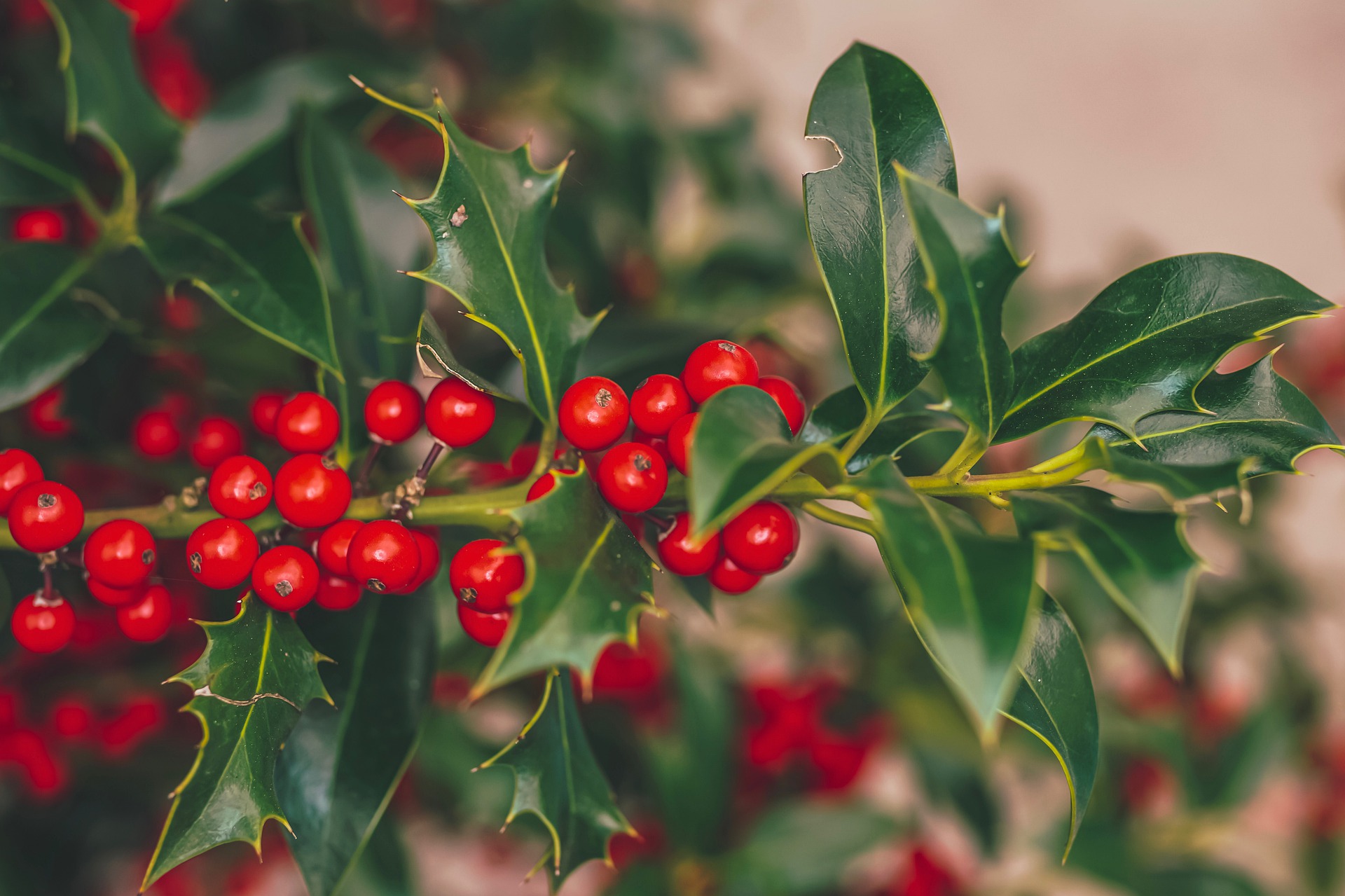 Holly is an evergreen tree with spiny leaves and red berries, particularly valued during the winter solstice. It protects from witchcraft, lightning, and wild animals.

A slow-growing evergreen tree or shrub, growing a straight trunk and a pyramidal crown. For ornamental purposes, it is often cut to a smaller size. Leathery, dark green leaves on the lower branches have spines to dissuade grazing animals; leaves on upper branches do not need this protection. Holly is dioecious, with male and female plants looking exactly the same until blooming. Male flowers are small and yellowish, while female are white or pinkish. The red, glossy drupes appear only on the female trees fertilized by the nearby male trees and mature in October and November; they are rarely foraged by animals until frost renders them tender and less bitter.

Holly thrives in moist, shady oak and beech forests, but it can survive even a full-sun exposition as an ornamental hedge. In deep woodlands, it creates dense, labyrinthine thickets providing food and shelter to a plethora of birds, small mammals, and insects. The flowers produce an abundance of sweet-smelling nectar and attract bees, moths, butterflies, and other pollinators. Holly adapts easily to various conditions and is a pioneer species, slowly repopulating the forests after cuts and fires.

To prolong the plant’s life, prune and forage wood in the early spring. Smaller cuts may be made during the year. Dry and season the wood thoroughly due to high moisture retention. The dense, sturdy and white wood takes dye easily and makes great musical instruments and wands. Gather leaves and fruit as necessary and dry the whole twigs; they keep both the shape and color.

Holly is rarely used in modern herbalism. The fresh fruits have a strong and almost instantaneous emetic and purgative effect, useful if you need to quickly empty a stomach. An infusion of dry leaves lowers fevers, and a powder of them applied to a wound will stop bleeding. To mend broken bones and sprains, apply a poultice of fresh leaves and bark.

A powerful herb of protection, holly keeps the wearer safe from evil spirits, witchcraft, lightning, and poison. Planted around the house, it extends protection to the building and everyone within. To save yourself from the attack of a wild animal, throw a sprig of holly at them; they will become tame, docile, and disinterested. To freeze water, throw holly flowers into it.

Holly is strongly connected to winter solstice rituals. Decorate the house and altar with holly and mistletoe to strengthen the effect of magic performed during that time, and protect yourself from other magicians’ interference. If gifted to another, berry-covered boughs grant protection and luck. Place them at your front door to inform the sylvan spirits they are allowed to seek shelter from the cold in your house. Burn the bough at Imbolc or the spirits will never leave.

The berries are mildly toxic, causing stomach upset, nausea, and vomiting. Contact with the leaves may cause mild skin irritation as well. However, the caffeine contained in the plant makes it poisonous to cats, dogs, and horses. Birds and livestock are immune.

A Christmastime classic, the use of holly as a decoration has its roots in old Pagan religions. The Romans used it during Saturnalia, a festival and holiday in honor of the god Saturn, held on 17—23 December. The festivities included religious sacrifices, public banquets, private parties, gift-giving, gambling, drinking, and a time of liberty for slaves and free people alike. The houses were decorated with holly, and boughs of them were given as gifts. Holly was so closely connected with Saturnalia that its use was once forbidden to early Christians by an edict of the Church of Bracara (now Braga, Portugal).

The love for this winter herb was shared by the druids, who both carried holly for protection and decorated their abodes with it to inform woodland spirits that they are welcome to seek warmth and shelter inside. Wreathes of holly are still used in modern druidic and wiccan traditions to welcome a new priestess or priest to the community. In Neopagan beliefs, the Holly King holds court from Midsummer to Midwinter, ruling over the Earth until his brother, the Oak King, slays him at Midsummer and takes over—until the same fate befalls him half a year later, in an eternal circle of war, death, and rebirth.

Unsurprisingly, there is also a legend that holly first sprang up under the footsteps of Christ, with the spiny leaves and red berries reminding us about the thorn crown, drops of blood, and the general suffering. Also unsurprisingly, holly does not grow in Palestine.

← Underwater Encounters
Tabletop for Fun and Profit: The Lessons of 2021 →