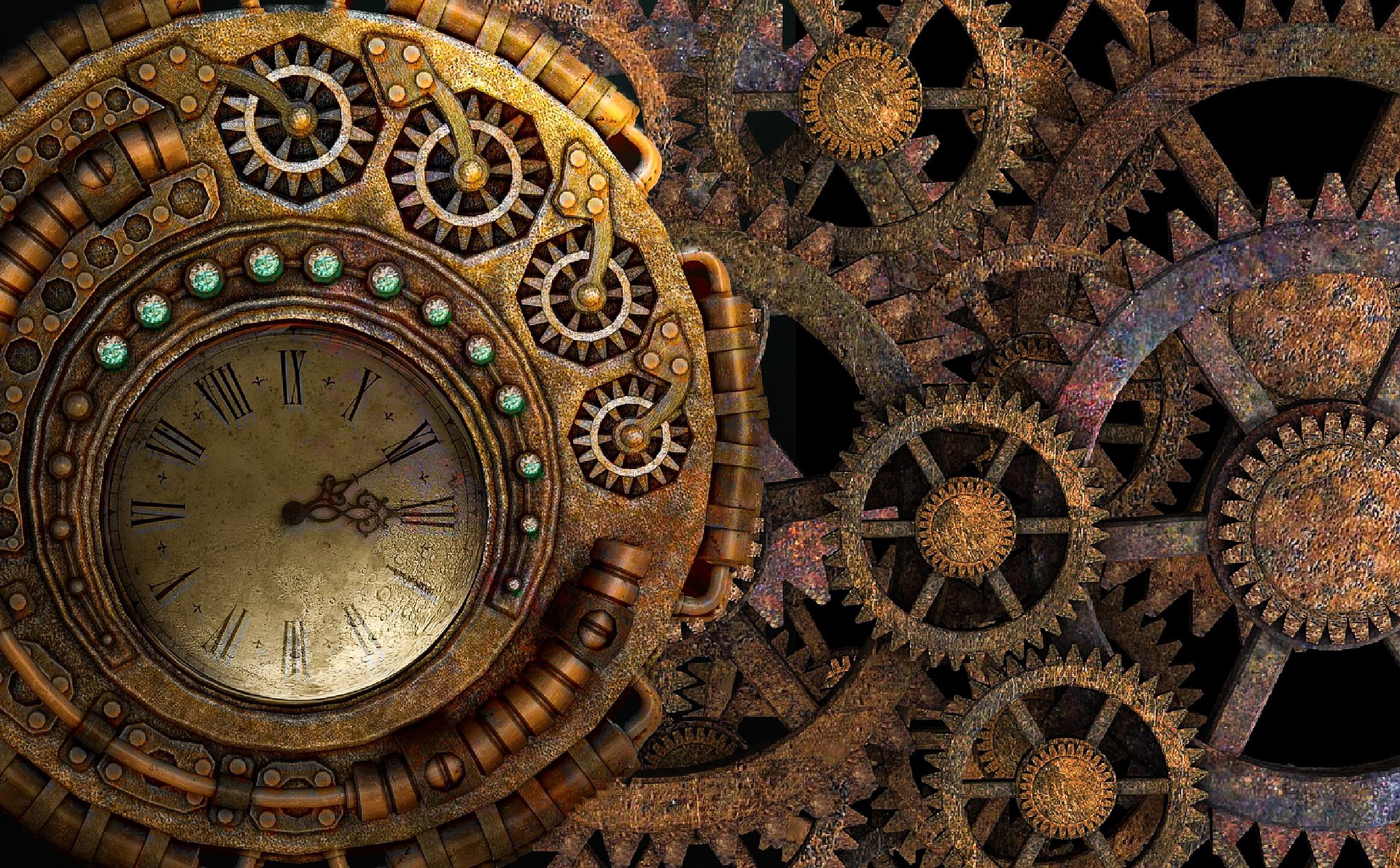 Is it okay if you give somebody a lift? What if you give back answers? Do you get cheek-ache reading the news? Take a look at this curated collection of useful and colorful words and phrases of Victorian slang and make your 19th-century-inspired games more fleshed-out!

Today, we’re delving into The Victorian Dictionary of Slang & Phrase by James Redding Ware (Bodleian Library, University of Oxford, 2013) to uncover the long-lost gems of language that will add sparkle and sheen to your steampunk games.

The book is a curious one – it was actually published in 1909, as Passing English of the Victorian Era: A Dictionary of Heterodox English, Slang, and Phrase, and the Oxford edition is just a facsimile (an exact reprint) with a new introduction. Ware was a very colorful persona with troubled youth, experience in grocery sales, and finally – a prolific writing career he has started in his late 20s. He was a journalist, a playwright, a songwriter, and a translator – all the while moonlighting as a writer of sensational ‘casebooks’ on weird and mysterious police investigations. His most popular book on this secret side is The Female Detective (published under the pseudonym Andrew Forrester), introducing the first ever professional female detective character, Miss Gladden, over 50 years before women were even allowed to join the police forces in the UK.

But that’s not why we’re here. Let’s delve into the Victorian slang! For convenience, I’ve separated the slang into five categories:

About and about. Mere chatter, the conversation of fools who talk for sheer talking’s sake.

Bitch the pot (University). To pour out the tea.

Cock-pit (Political). A convenient place for settling a sanguinary quarrel. From the pit or enclosure in which the cocks fought, and which would become much blood-stained – hence the name was given to that portion of a warship to which the wounded were taken for treatment.

Come out, to. To appear in society – applied to young women in society. The crown which finishes the work of coming out is presentation at Court.

Dig me out. I.e., call for me; tear me from lazy loafing in the house.

Don’t sell me a dog. Do not deceive me. Derived from the experience that the purchase of a dog, most fanciers being thieves, was ever a deception.

Dress for the part. To act hypocritically.

Elaborate the truth. To lie.

Gooseberry-picker. A confidant in love matters, who shields the couple, and brings about interviews between them.

Got the morbs. Temporary melancholia.

Left the minority. No longer with the living.

Locust. Extravagant person who sweeps everything away.

New departure. Synonym for change of any kind.

Perplexed and transient phantom (Political). Politician who fails and vanishes.

Sub rosa. In secret. Sometimes: under the rose.

White elephant. An article (generally large and expensive), for which you have no use.

All his buttons on. Sharp, alive, active, not to be deceived.

Anti-Tox. A drug to sober a drunken person, Tox is, of course, the abbreviation of intoxication.

Axe to grind. A personal end to serve, originally a favor to ask.

Back answers. Sharp retorts, quick-tongued replies, dorsal eructations, without any concession to the laws of etiquette.

Balloon (Tailors’). A week of forced idleness from want of work.

Balsam (Sporting). Money. From both medicaments being of such an agreeable character.

Cheek-ache. Blushing or turning red in the face rather for the meanness of another than your own.

Clouded over. Overwhelmed by misfortune.

Dodo. A human fossil, a man who clings to the past, and condemns future days and present. (Also a slang term for Scotland Yard, for similar reasons – note A.U.)

Dun. To worry for money.

Flare-up. A stir, a riot, disturbance.

Get fits. Suffer rage from being conquered; impatient under defeat.

Handful. Trouble, difficulty. Much to contend with.

Keep off the grass. Be cautious.

Kill with kindness. To cause shame by overwhelming with satirical attentions a person who has misbehaved himself. It is not forgiveness but retaliation.

Knapsack descent. Soldiers in a family, either on the father’s or mother’s side, and very possibly both.

Mush, gush, and lush. Mean interested criticism – critiques paid for either in money or feastings.

Nice place to live out of. Evasive way of condemning a locality.

No better than they ought to be. Worse than many.

Out of the tail of the eye. Furtive observation.

Podsnappery. Willful determination to ignore the objectionable or inconvenient, at the same time assuming airs of superior virtue and noble resignation.

Putting the value on it (Artists’). Signing a canvas. Satirical – meaning the work has no real value, and sells only by reason of the name attached.

Sling joints. Gain a living rather by physical than mental effort.

Sympathetic truth (Artists’). True, but not too true – some concession to the artistic ideal.

Toast your blooming eyebrows. Probably a delicate way of telling the man to go to blazes.

All a treat. Perfection of enjoyment, sometimes used satirically to depict mild catastrophe.

‘Apenny-lot day. A bad time for business – really, when everything has to be sold cheap.

Bags o’ mystery. A satirical term for sausages, because no man but the maker knows what’s in them.

Bet your boots (Western American). Absolutely safe betting – the boots being the most serious item of expense in the Wild West uniform.

Block a quiet pub. To stop a long time in a tavern […]; to remain quietly drinking in an out-of-the-way public house.

Busking (Street-singers’). Going from pub to pub singing and reciting, generally in tow with a banjo.

Carry me out. A satirical expression, pretending defeat, humiliation, and pardon. Sometimes ‘carry me out and bury me decent.’

Choker. A lie, in its most direct form.

Cut a finger. To cause a disagreeable odour.

Dominoes. Teeth, when bad and yellow. When white, they are ivories.

Fighting the tiger. Gaming, with all its consequences,; some of which are desperate. Practically applied – desperate game.

Find cold weather. To be bounced or expelled (from a public house).

Get your eye in a sling. Warning that you may receive a sudden and early black eye, calling for a bandage – the sling in question.

Give a lift. A sharp quick kick.

Scarpe along. To live somehow from day to day, to scrape off a living.

Take off my coat. Challenge to fight.

Virtue rewarded. Prison van – ironical reference to the moral nature of its occupants, and based upon the initials V.R., which used to be seen on each side.

Beach-comber. A pirate, a beach-loafer, or a yachting tourist. In its earlier shape it referred to the pirate who made a landing and swept up all he could – that is, he ‘combed the beach’.

Com. A commercial traveller in business.

Corroboree. A drunken spree, in which there is much yelling.

Deal of weather about. Bad meteorological times. For sailors fine weather is no weather at all. On the sea the word always means discomfort and struggle, as may be seen in its use, ‘weather the storm’.

Duck-pond. The shallow bathing place on the lower deck, effected by a rig-up of sail-cloth, made watertight, fixed to the deck, and in which the cadets wash and roll themselves, in batches, under the watchful eyes of a warrant officer.

Hardware. Ammunition in general, and shells in particular.

Her Majesty’s naval police. Sharks – whose presence all over the world prevents the sailors from deserting by way of harbour water.

Look slippery. Hurry up, be quick – from the association of slipperiness and speed.

Schooners, frigates, and full-masters. Degrees of comparison as to the capabilities in the Navy – the least accomplished being the schooner, the frigate the youth who is handy at his business, and the full-master the achieved youngster who can learn no more of the art – of navigation understood.

Wet ship. Ship in which captain and company drink heavily.

Away. A man is never spoken of as ‘in prison’, though he is there for many a ‘stretch’. It would evince great want of etiquette to mention the detaining locality, e.g., ‘Mine’s away, bless ‘is ‘art,’ […]. The answer should be, ‘A ‘happy return ‘ome to ‘im, mum’.

Back slang it. To go out the back way.

Bit-faker. Counterfeit money-maker – from ‘bit’, money, and ‘fake’, to make, or rather cunningly to imitate.

Coster. Short for costermonger, a great being in low life, generally a sort of prince, and often a king o’ the costers.

Crack a case. To break into a house.

Crush the stur. To break from prison.

Dance upon nothing. To be hanged – the convulsive motions of the legs in the air suggesting the phrase.

Do a bust. To burst a house open; burglary.

Do one’s bit. To carry out one’s enforced contract as a felon with the Government.

Fill, to give a. To deceive.

Gallersgood. Corruption of gallows’ good. So bad that it is worthy of the gallows.

Greys. Evasive name for silver – from its colour presumably; and figuratively, money.

Nap the regulars. Receive or grab the customary portion of the money resulting from the sale of stolen property.

Penny loaf. Cur – one afraid to steal; a man who would rather live on a penny loaf than steal good beef.

Put the light out. Kill.

Readied the rosser. Bribed the police.

Rushing business. Robbery by adroitness, cheating under the semblance of fair treatment.

Spooning the burick. Making love to a friend’s wife.

Are you working on a Victorian-inspired book or a game? Check out other articles from Worldbuilder’s Library!

At least for a historian. Seriously, those guys will raid your garbage bin and steal your receipts. And the humanity will be grateful. After a while. I’ve just put my hands on the last (well, fourth out of five, they weren’t delivered in the right order) volume of History of Private Life. It’s probably one of the…