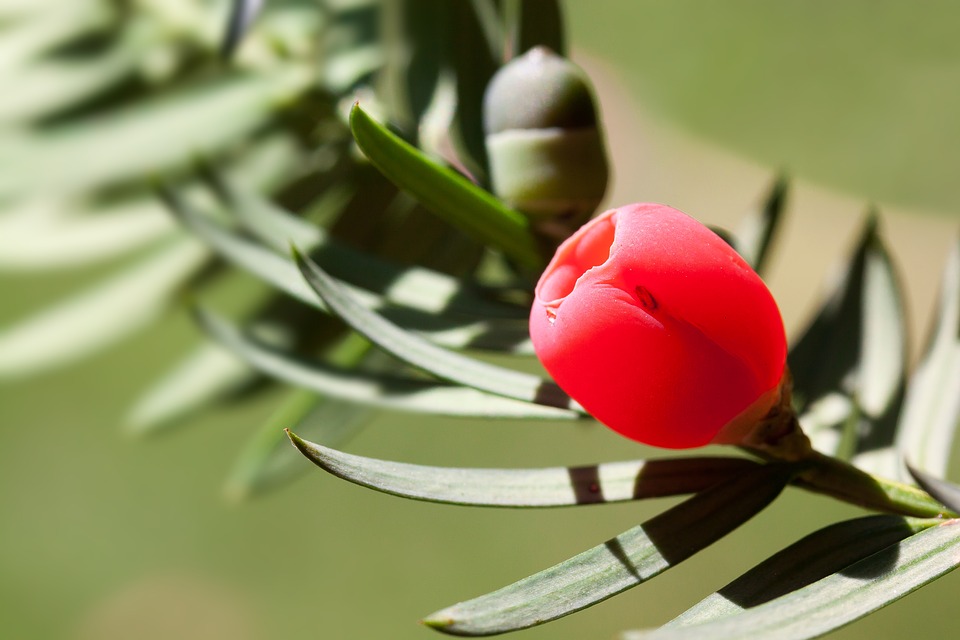 Yew is a highly toxic evergreen tree, with showy, red berries and flat, green needles.
It symbolizes death and rebirth, allowing contact, control, and raising of the dead.

An evergreen conifer with a wide, stout trunk covered in thin, peeling, red-brown bark. In very old specimens, trunk becomes hollow. Branches are covered in flat, dark green needle-shaped leaves, spirally arranged but twisting to form flat rows on ether side of the stem. Male flowers are small but create an abundance of pollen, while female flowers are bud-like and scaly, producing seeds encased in a red, fleshy, berry-like structure called aril.

Slow-growing and long-lived tree, yews commonly survive for 400—600 years, with some specimens dated at over two millennia. Most of them are dioecious, with male and female flowers growing on separate plants, but some individuals are known to grow both kinds of flowers or even change sex with time. Yews are wind-pollinated and not self-fertile, but do attract wildlife, mostly birds that snack on berries. Yews can withstand even the deepest shade, can tolerate frost, drought, and pollution.

Harvest twigs or wood as necessary, wearing gloves and a mask; inhaled sawdust is toxic. Split the wood into staves, remove the pith, seal the ends and dry. Season the wood for at least six months to remove the toxicity. The highest concentration of the poison occurs during winter solstice.

The red fruits are edible, very sweet and gelatinous, with somewhat of a snotty texture. Eat them raw after deseeding; see notes on toxicity. Seeds have a very bitter flavor and should never be swallowed.

Yew is the tree of the dead, used in rituals of summoning spirits, restoring life, and even in the foul practices of raising corpses and creating undead servants. Wands and other tools made from yew wood are particularly common between necromancers and those who wish to commune with the spirits of the dead. Planted at graveyards, it creates natural places of gathering for lost souls, keeping them from wandering freely in the area. Yews often accompany places of worship as a reminder of eternal life.

Weapons made from yew or equipped with yew handles are not damaged by any poison or acid, but instead strengthen the power of the poison. Strong yet flexible, yew wood is prized by bowyers and luthiers.

All parts of yew, save for the berries, are highly toxic due to taxine alkaloids. The concentration is highest in the seeds, but the poisoning usually occurs in animals by eating the leaves. The lethal dose for humans is about 50 g of leaves. The wood retains toxicity for months after harvesting, and the poisonous potential even grows as the water evaporates.

The alkaloids are absorbed quickly and cause dry mouth, vomiting, vertigo, abdominal pain, arrhythmia, hypotension, unconsciousness, and cardiac arrest. There is no antidote; apply treatment of atropine of similar stimulants and counteract the symptoms for at least six hours since the onset. Distilled yew poison is the most active plant poison in existence, able to cause death in an instant. The pollen spread by male trees is also highly allergenic.

Taxus baccata, known as English or European yew, is a staple of churchyards and graveyards. It is estimated that about 500 English churches are now accompanied by a yew tree older than the building itself. The exact reason is unknown: it is speculated yews were connected to places of worship because of their magical power of keeping the spirits of the dead trapped underground. Another hypothesis states yews were planted at graveyards to stop farmers bringing their cattle to graze on plants growing between the graves; yew foliage is extremely toxic to cattle.

In either case, yews were used for multiple purposes in Europe for hundreds of thousands of years. One of the world’s oldest surviving wooden artifacts is a yew spear head, estimated to be over 450,000 years old. It was used for the well-known English longbows (with red heartwood used as the inner layer and white sapwood as the outer layer). It was also widely employed for its toxicity, as arrow poison, a murder weapon, or a method of suicide (according to Caesar in Gallic Wars, Cativolcus, chief of the Eburones, poisoned himself with yew rather than submit to Rome). Their association with death, longevity, and even rebirth has heavily influenced modern occult, which treats yew as an ominous plant, only to be called upon in the gravest of matters, sacred to Saturn and other gods of the afterlife.

Some scholars even believe the Norse sacred tree, Yggdrasil, usually considered a giant ash tree, has been misinterpreted and should be, in fact, represented as a yew.