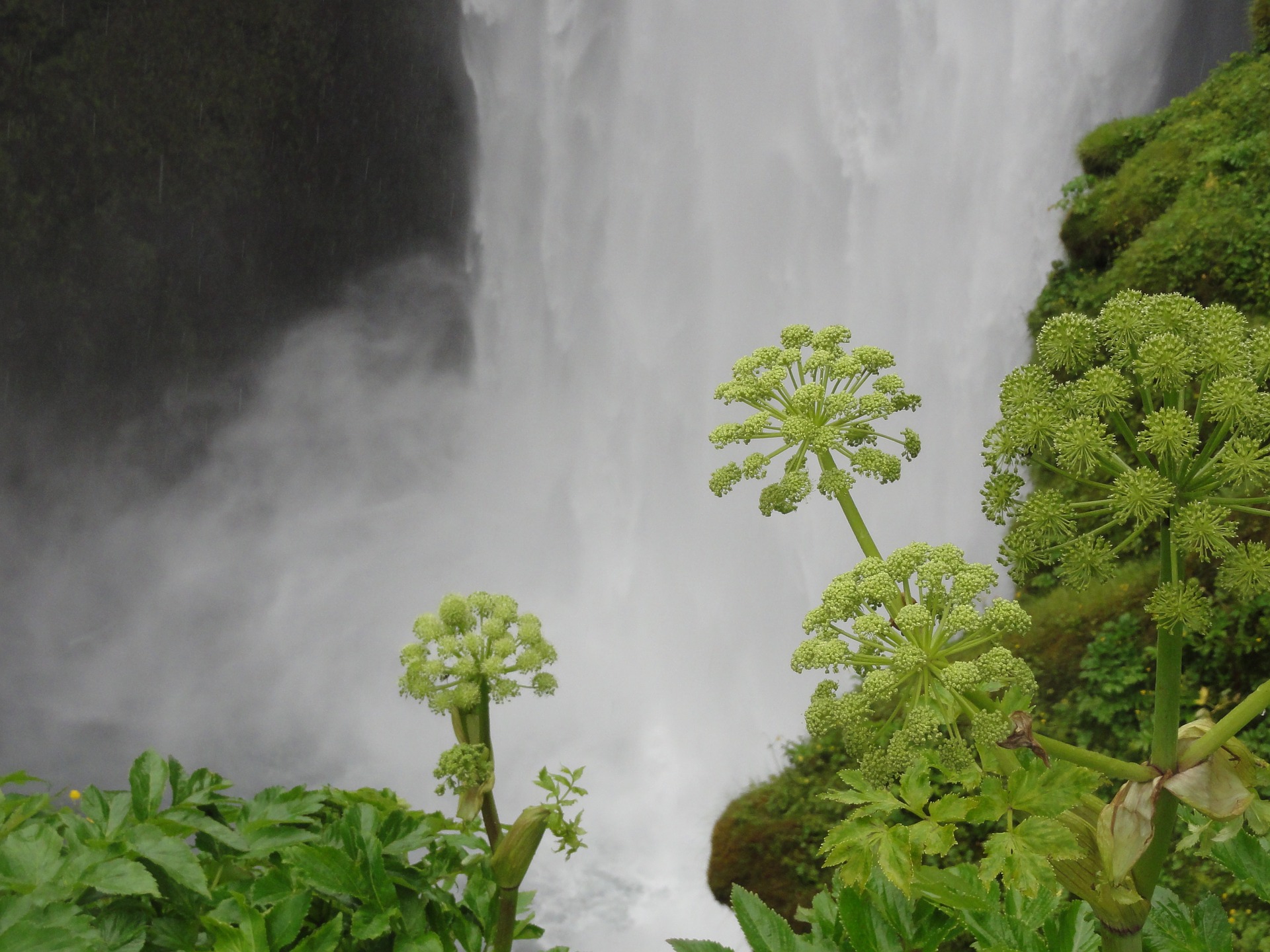 Angelica is a tall, erect plant with bright, yellow-green leaves aggregated toward the base and greenish flowers grouped into large, globular umbels which bear pale yellow, oblong fruits. The above-ground part of the plant has a licorice-like taste and a strong aroma, similar to musk and juniper. The root contains a high concentration of angelic acid: a volatile solid with biting taste and pungent, sour odor.

It looks similar to other plants of the Apiaceae family and is easy to confuse with poisonous hemlock and hogweed. Use only after identification beyond any doubt.

Angelica grows widely and abundantly in temperate and cold zones, even in polar regions. It requires damp soil and flourishes near rivers. Cultivate this hardy plant in full sun or partial shade, but it will withstand full shade if necessary. It can be turned into a perennial plant if prevented from setting seeds.

Gather the root in the first year’s autumn and early winter as it’s bitterer and more resistant to mold than older specimens. The medicinal and magical properties of angelica are partially extracted by water and fully by alcohol – if possible, all the preparations should be alcohol-based to achieve the best results.

Peeled hollow stems are edible and can be eaten like celery or made into jams or food flavoring; use candied ones to decorate cakes and desserts. Distilleries use the roots in the production of gin (with juniper and coriander) and to flavor liqueurs (especially quince-based), absinthe, bitters, and aquavits.

The most potent version of angelica is an alcohol-based root extract, but stems and seeds can be used instead. Use angelica’s antibacterial properties in curing problems of the digestive tract: flatulence, colic, indigestion, stomach ulcers, appetite loss, and nausea. It improves circulation, raises body temperature, has a positive effect on the lungs, and alleviates rheumatic pains.

Do not use angelica in diabetes (it raises sugar level in urine) or while pregnant (it causes uterus cramps). Ingestion of the plant increases sunlight sensitivity and can exacerbate the sunlight allergy.

Angelica is mostly valued for its protective qualities. If grown around a building, it creates an anti-sorcery barrier, which can be reinforced by sprinkling dried herb in the corners. Added to bath (powdered root or the essential oil), it breaks curses and unwanted spells, especially when mixed with nettle (see Curse-Breaking Bath).

Burn the dried root as incense to bring visions and help meditation. While not advised to browse past or current events, angelica enhances divinations of the future and is especially useful for piercing the veil regarding the games of chance.

Use the juice squeezed from fresh stems to comfort and mend broken hearts. As noted above, you can heighten the effect by mixing the juice with alcohol. Or just drink some gin.

Angelica is the most important medicinal plant in the Sámi culture. Known in Scandinavia since at least 12th century, it is valued both as a vegetable, and a shamanic medicine. The hollow stems were used to make a flutelike instrument, called a fátnu, able to produce a couple of notes in a gentle, melancholy tone for as long as the herb was fresh. Those pipes were used in magical rituals together with drums.

Outside of the region, angelica was often considered a panacea; its name, archangelica, comes from the belief that it was bestowed upon humanity by archangel Michael as the cure for the bubonic plague, amongst other diseases. The existing studies of the plant’s properties give some credibility to the claims—if not those about the supernatural origins, then definitely those about the medicinal usefulness in treating tumors and ulcers, protecting the liver, fighting fungal infections, stimulating the bodily functions, and relieving cough.