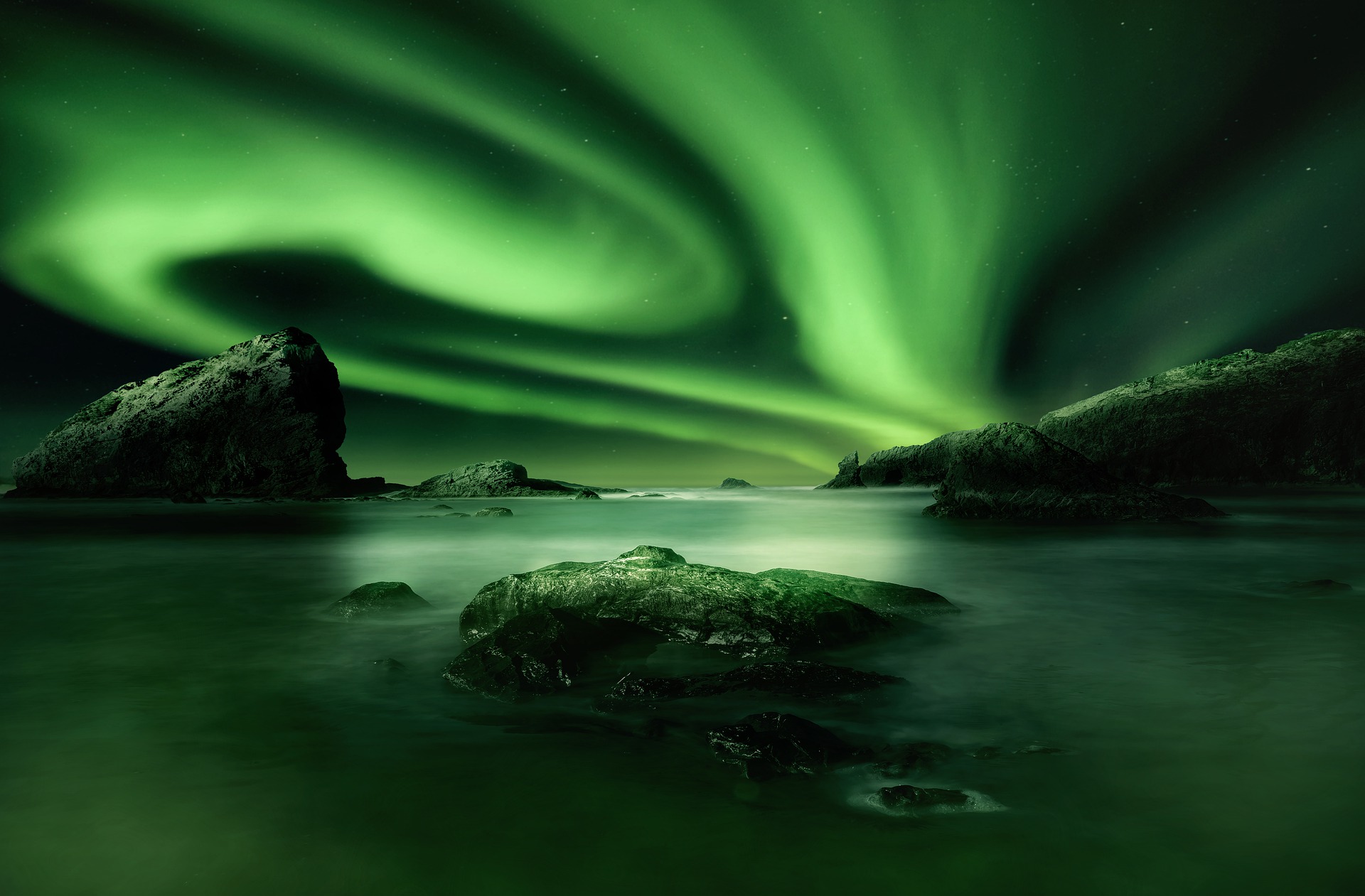 I don’t always write blog posts, but when I do, I don’t know where to start. I’ll start at the beginning then – and I’m not one for long introductions. And so, welcome to the introductory blog post about Project Aphelion’s parallel upcoming game, Blazing Aurorae.

As you may have heard from us in the last few years, Project Aphelion is a game I’m working on for some time now, almost ready for the final stages of development. I compiled the playtest results into a new build, but since I’m me, instead of updating the almost ready Aphelion book first, I’m putting together a sister-game, Blazing Aurorae, to later backtrack them into an already finished Aphelion book. Parkour.

What Is Blazing Aurorae?

To put it shortly, Blazing Aurorae is a sci-fantasy tabletop roleplaying game combining Aphelion’s ruleset and a unique setting. It’s about developing communities, exploration, discovery, and journeys into the unknown. In the game, players are a crew of traders, mercenaries, or explorers headed into long journeys filled with adventure and unknown to provide for their community.

As they do so, the community becomes wealthier and offers better support for the players’ endeavors, and even additional crews explore further and handle matters of importance for them. As they grow, the players will make friends, enemies, encounter wonders and terrors in a dynamic world generated as they play.

As with Project Aphelion, little to no prep is required to play, as the game is intended for intuitive play, group or solo, optionally with a traditional GM, or with the function shared between players. Aurorae are made with a low approach threshold in mind, making it easy to pick up and play, but can be as complex and crunchy as you want, as options for customization and crafting are infinite.

But what kind of a game is it, really?

Blazing Aurorae is set within a volatile white dwarf binary system, the exchange of material between the stars creating an accretion disk of ejected material known as “mists.” This dense halo isn’t as inhospitable to life as it would seem at first glance – multiple indigenous creatures call this near-void their home, as do various cultures of humanity, living on asteroids and pieces of land suspended in it.

The setting’s center, known as Auroran Domains, is one such collection of suspended islands, connected through trade routes and complex history between the inhabitants. It’s a place of war, trade, exploration, and a constant struggle for survival, as ancient magics and human perseverance are the only things standing between civilization and the drastically inhospitable environment. Ships of wood and bone and stone fortresses traverse the vast expanses of milky fogs made of stardust, carrying aboard them explorers, adventurers and traders.

Humanity strives to survive and prosper within the Auroran Domains despite the inhospitable conditions. Civilizations rose and fell for a millennium on suspended islands, isolated by the vastness of misty voids and cultural differences. A new era of trade brought about by discovering and taking advantage of the mist’s natural properties brought those independent settlement-states closer together, bringing progress, but also strife and wars.

As a player, you’ll be able to choose one of seven ready cultures, with their unique strengths, outlooks on life and weaknesses, or design your own from scratch using an easy “design as you go” system to create a culture you want to be a part of. Meet strangers or members of your people, create relations, trade, or compete against them in an evolving, reactive world with as much complexity as you want it to have.

Humanity and familiar animals aren’t the only denizens of Auroran Domains. The mists are inhabited by giant creatures completely alien and hard to comprehend, the natural creations of their environment. Some people try to hunt them, some live alongside or even inside them, but few claim to understand them and their eldritch life cycles.

Other inhuman creatures live alongside humanity, competing for the same resources and living space. Crawling just beneath our feet, stalking the wilderness and sneaking unseen to prey upon humanity in our own settlements, or going about their ancient ways without interacting with human cultures at all. In your games they’ll be procedurally encountered and integrated into the campaign, changing it forever with their unknowable intentions, or merely passing by.

Blazing Aurorae use Aphelion Engine, easy to learn, modular and scalable from single-player experience to a grand strategy game. The ruleset lets you start playing right away, create characters, backstories, communities, and everything else needed as a part of your game experience. When playing in a group, creating characters and your campaign setting is a part of the gameplay experience.

The game’s rules are adjustable in complexity, easy to mod and extrapolate, and are designed to facilitate varied gameplay without a barrage of rules and exceptions. At the same time, the scalable complexity lets you crunch to your heart’s content once you get the hang of it.

Combat in Blazing Aurorae is tactical, dynamic, and engaging. You can cooperate or duel against other characters, using the terrain and conditions as well as your character’s abilities. The system of action cards lets you keep track of abilities and dynamically generate opponent’s behavior as you play, and engage players currently out of turn in the decision-making process. You can play out combat scenarios from climactic duels, group versus group, or massive battles with equal ease, all without losing player agency, and the importance of player characters and other heroes during the battle.

To top it all off, the game also launches with ship and vehicle combat engaging players into different roles, and epic boss battles, flipping the script against the players. Instead of being the active force carrying the engagements, when facing off against massive creatures and powerful contraptions the players are reactive, in scenes truly recreating the power of titanic bosses – you’ll need to use wits and enemy weaknesses against them to hope to win. Slapping giant toes until the boss drops is not an option.

Aurorae magic is made possible to the ever-present stardust filling the world space. You can research magical elements, arcana, and attunements, or find them while playing the game – and design your own spells. There are hundreds of potential elements, allowing you to create pretty much any magical effect imaginable, using simple and clear magic creation rules.

Those rules aren’t only a mechanical factor, they’re part of the world and its essence felt on every step during the game. The magic crafting system lets you bind elements into functional matrices to use, with the potency of effect and its cost adjusted to fit your liking. It grows in complexity as you explore and uncover more arcana, letting you decide on the crunch level and how deep you want to get into it – from simple spells to be used as enhancers for physical abilities to massive feats of magical power reshaping the world and moving entire islands.

Blazing Aurorae has exploration at its core. During the game you will work for the community you created, as its envoys, or leaders – depending on how deep you want to get into strategy and politics. Manage your resources and equip your ships and their crews, delve into the dangerous void and bring back tales of your exploits and wares. You can trade, scavenge, raid other communities, and discover wonders, but everything you do has consequences.

If you choose to lead your community, you will decide on their development and the approach they take to other folks and the strange wonders of the mists. If you choose to be an envoy or work independently, the community will develop itself according to simple guidelines, and place you in a reactive position.

Islands and meteors discovered during the game are procedurally generated by all the players at the table and require no prep, just land your ship and go explore. You may find lost wonders, useful resources, wild beasts, or other communities whose attitude depends on similarities between your peoples, your values, and how you go about making a first impression.
How you work with other communities met during your travels matters – make friends, establish trade routes, or pillage and start wars. Either way, different factions you meet will treat you according to your deeds and reputation.

During your travels you may find mysterious wonders of lost eras, sinking islands, undead ships enchanted with powerful bound spirits, lost treasures of civilizations of yore, and even meet secretive, inhuman denizens of the void. How you react to those events can shape the campaign, starting you on an epic journey to discover the secrets lost in the void.

Blazing Aurorae is not only about crafting spells – you can (and should) design your equipment as well. You can make armors, weapons, even ships, and powerful siege engines to match the materials available and the exact strengths and weaknesses they would have. Create clockwork and mist engine-powered mechanisms, design new solutions to problems you face during the game, and utilize them all to change the world.

As you invent new things, other cultures you trade with or fight against will take notice, and will want to buy or copy them, or even create their own new technologies in response. What materials are valuable and what everyone’s gear looks like can change drastically during the game in response to player actions and new items they choose to craft.

Aurorae operates using a soft system of classes, giving you a framework to fuel your inventiveness rather than limiting your progress. How you play the game will change what options of progressions you have available – making it all about your choices. A simple system of Potential points funnels player activities into the direction you choose, reshaping the world around you in the process. Your starting class determines your starting opportunities and challenges, how you overcome them will depend on how you like to play the game – and that will in turn shape what the game will promote you for doing.

I think I went over most major features – naturally skipping rule and lore details, cause I could go on for days about it. The new build of Aphelion Engine is fully (I hope) capable of realizing the vision and running the game almost on its own – as close to it as you can get without a computer to run the algorithms for you. Currently, as I write these words (instead of actually writing the game, grumble, grumble) the rulebook is about halfway done. I think if I can keep up the pace of works, we should have a full game before the end of the year, and Project Aphelion hot on its heels.

Stay tuned for future updates and don’t forget to check out our Patreon and other social media. So yeah, my endings are as abrupt as my forewords – feel free to drop questions about the project and comments, and I’ll maybe get back to work on making the game, aight?

A weird unidentified object seen on the Finnish sky yesterday, May 18th, 2022
We're LIVE! Incitatus - a sci-fi thriller and your introduction to the world of Aphelion RPG - is here!
Disturbing lack of elf ears.
Something great and spooky is coming this way! Incitatus, a sci-fi thriller novel, is now up for pre-orders everywhere good books are sold!
The witchcraft research continues! History of magic has always interested me more than practice. This book covers so many different aspects of magical traditions throughout ages that it makes a great entry into the historical study. I plan to turn it into entertainment :) #witch #witchybooks #bookstagram
Some freshly delivered light reading, officially known as research! I have this awful itch to write more about various magical traditions and techniques of the world. Maybe, once I'm done with magical geology?
Loading Comments...
%d bloggers like this: