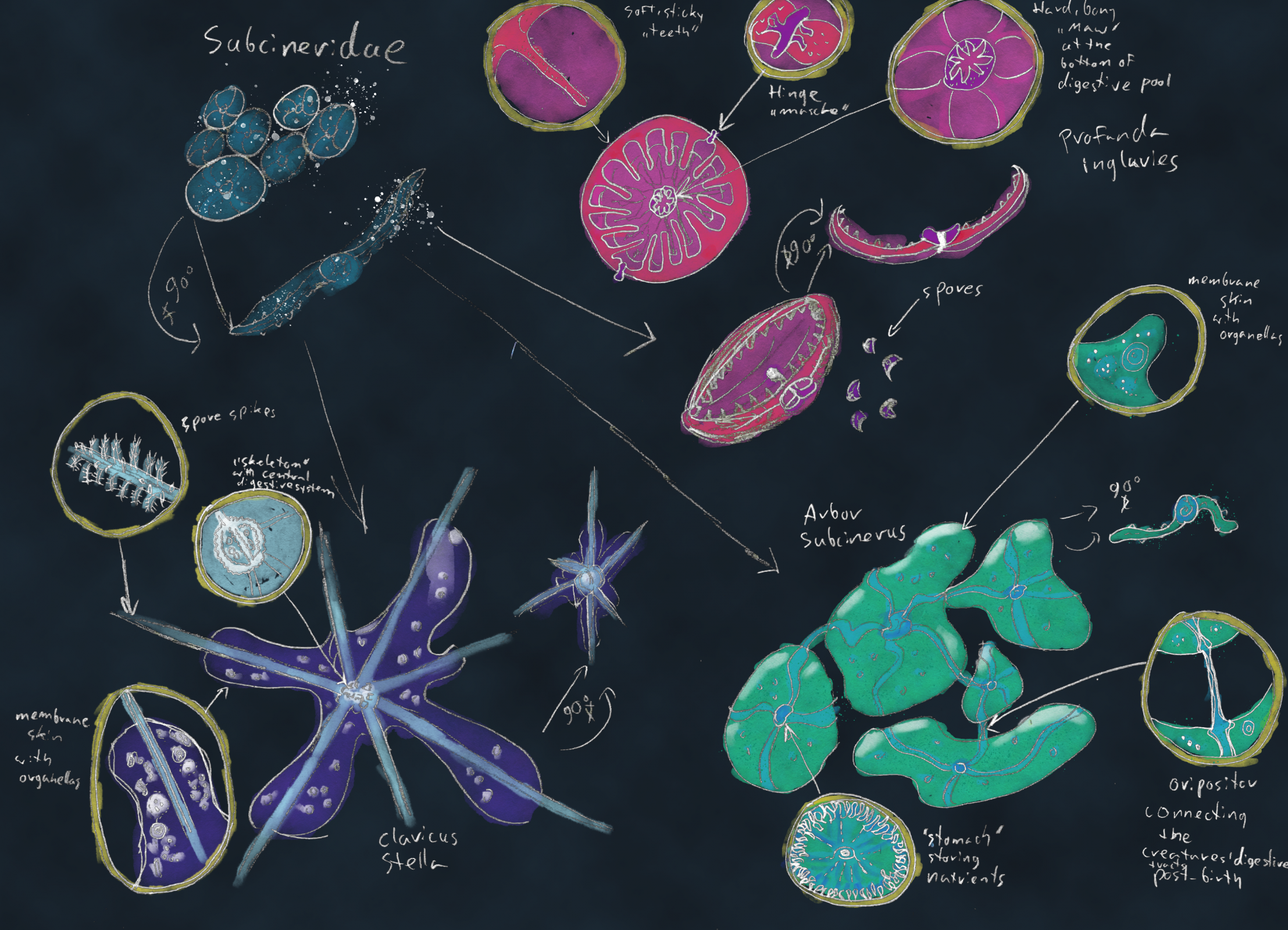 It’s time to make some creatures!

With that lengthy and overly elaborate introduction, welcome to the third part of Blazing Aurorae’s worldbuilding blog. In previous blogs, I covered the conditions in the comet’s tail, as well as the spark of life itself. Today, I’m going to create the basis for all the future fantastic beings that will populate the mists’ vast emptiness.

There are many ways in which cellular life could adapt to exist and thrive in the void-like environment, and I think it’s not fair to choose one over the other – which is why we’ll have all of them.

The first clade we’ll be making are Subcineridae.

Those relatively simple creatures rely on chance and tides for sustenance, much like our Earthly jellyfish. They’re all large, flat beings with a sticky membrane-like skin on which they rely on to provide nutrients. All the Subcineridae species float aimlessly through the mists, ingesting anything they come in contact with.

That passive lifestyle doesn’t require much in the way of sensory input or decision-making. All they really need is an ability to extend their mass towards food. As such, they have no nervous systems to speak of. All of the Subcineridae procreate through mitosis, some releasing the young in the form of spores, while others choose more exotic means of prolonging the species – all do it often and in massive numbers, to make up for the relatively low survival chances.

We have so much in common

The Subcineridae have many traits in common, regardless of species. They are ubiquitously heterotrophic, relying on outside sources of nutrients to survive. Once said nutrients – be it minerals, water, organic particles, or another creature – get into contact with the animal’s skin, the sticky acid covering it ensures it’s trapped. The creature then envelops its prey and slowly digests it, distributing nutrients and vital minerals throughout its gelatinous body. They store oxygen, water, and other substances vital to life in a series of balloon-like organs spread throughout their body, connected with a forest of tubes and veins distributing the digested nutrients.

Every species of the family grows their entire lifespans – the larger they get, the more nutrients and minerals they can absorb, and the biggest limitation to animal growth isn’t present. Normally, animals grow as large as their bodies can support them, and as effectively, they can spread oxygen and nutrients throughout their bodies.

On Earth, the limiting factors are atmospheric, or water pressure, and the respiratory system – animals in Auroare evolve in a near-vacuum environment and do not have to breathe. They ingest oxygen, nitrogen, and other gasses through their skin – just like food, and as a result, the larger they get, the more successful they are. The situation will change when they need to burn energy as active animals, but in the primordial clouds of the Aurorae archaic era, Subcineridae can grow to immense sizes and basically live forever as long as no outside force kills it.

Naturally, as the Subcineridae drift, they absorb aurorium dust and crystals.

We can’t have animals exploding in violent nuclear fusion all the time; it just won’t do. We’d never get anything done because everyone would have to hold umbrellas all the time to protect themselves from the slimy rain.

Instead, let’s have the animals digest the particles, combining it with other materials and their bodies in a non-violent fashion. Treated this way, the dust will no longer be an extremely volatile substance. Instead, it will remain inert while inside a live animal, soaking in the qualities from the material the animal eats, releasing a lot of oxygen in the process, which will further support the animal life. Once ejected for any reason, the dust will slowly evaporate the added ballast until it’s once more in a pure state.

As the last part of this blog, I will discuss three species of archaic animals from which we will base our evolution. From these three basic ancestor critters, we’ll build a true bestiary in the future. Thousands of early Subcineridae species proliferate in the proterozoic mists, but I think three species described in more detail will suffice.

First, we need some grazing animals – for lack of a better word.

Arbor Subcinerus is the most typical representative of the wide family of peaceful chemotrophic animals. Its body is mostly flat, as with most Subcineridae, with a bulbous growth more or less in the middle of its irregular, amorphous surface. Its translucent skin is covered in acidic substance digesting anything that touches it.

The creature’s rubbery flesh contains millions of hair-like pores, slowly moving the dissolved contents to the animal’s core or hundreds of smaller bulbs located along the tick veins. The round bulb in the creature’s center contains the heart, stomach, and other organs necessary for survival, as well as four to twelve sclerous straws connecting the bulb to the animal’s rim.

Arbor procreates through those straws, growing more of them as the animal gets older. When the straw reaches the rim, an egg is released, hatching as soon as it reaches the ovipositor’s tip. From that point onward, the animal grows, connected to the parent organism through the straw – it will share in the nutrients connected by its progenitor, and eventually release its own ovipositors. Arbors remain connected throughout their entire lifespan unless an external force separates them – in such case, a new egg is released through now empty straws.

Arbors drift through the misty clouds in colonies of hundreds and thousands, similarly to other Subcineridae species, slowly digesting the clouds away.

Another example of a survival mechanism typical for the Subcineridae family is Clavicus Stella.

This much more aggressive species chose an entirely different tactic. Like the Arbor, Stella has a bulbous central body containing all important organs and digestive tracts. Unlike that of its cousin, however, Stella’s core is protected by chitinous carapace protecting it from damage.

A number of straws protrude from it, but unlike the Arbor’s soft ovipositors, Stella’s straws are hard barbs containing spore-like eggs at its needle tips, splitting into thousands of sharp spikes. The barbs split indefinitely in a fractal pattern when the animal grows, some of the larger specimens end up with a nearly net of sharp needles a decent distance away from the main spikes. The animal’s gelatinous body extends from the armored core, climbing the barbed spikes and reaching for any digestible substance, omnivorous like all the Subcineridae.

The animal remains in a hibernation-like state until one of the barbs make contact with the barbs, either getting trapped in the thick forest of needles or breaking some of them off as it makes contact.

In the first case, Stella’s gelatinous, slug-like body awakes and emerges from the hard core, slowly climbing the barbed spikes to reach its prey. When it does, the animal digests the material slowly before the body retracts. If the object or animal breaks off some of the barbs, they get stuck to it and hatch all of the microscopic eggs they contain.

Newborn Stellas grow fast, digesting the material and growing new spikes – some of which will also tear, giving birth to new animals. A single barb stuck into an Arbor will eat the animal alive within years as Stellas slowly tear it apart as the barbs move through the creature’s bloodstream, eating it alive. It is not uncommon for Arbors to catch a parasitic hitchhiker like that, and many Abor colonies are being slowly digested by the ever-growing spiky predator overtaking the colony.

The last animal we discuss today is Profunda Ingluvies. This species chose an entirely different approach to keeping itself alive – that of a living trap.

The central core of its body opens into a maw surrounded by chitinous protrusions, and the rim was raise into a bowl encompassed by a stiff skin. The bowl’s inside is filled with sticky digestive fluids, trapping everything inside. Hundreds of meaty tendrils covered in hair-thin spikes surround the rim, preventing anything once caught from every escaping the maw. Finally, a hinge-like joint allows the maw to close on any object large enough to fill it, preventing it from drifting away.

Unlike other Subcineridae, Profunda is a solitary creature. It ejects spore-like eggs from its rear end cloaca, together with any undigestable matter as it drifts. The spores remain closed until they make contact with a sizeable chunk of matter, when they attach themselves with the maw, and digest it slowly, growing while at it.

In the next post we’ll follow the evolution train and get the critters a couple steps and eons further!

Disturbing lack of elf ears.
Something great and spooky is coming this way! Incitatus, a sci-fi thriller novel, is now up for pre-orders everywhere good books are sold!
The witchcraft research continues! History of magic has always interested me more than practice. This book covers so many different aspects of magical traditions throughout ages that it makes a great entry into the historical study. I plan to turn it into entertainment :) #witch #witchybooks #bookstagram
Some freshly delivered light reading, officially known as research! I have this awful itch to write more about various magical traditions and techniques of the world. Maybe, once I'm done with magical geology?
Sunflower is the national flower of Ukraine and the symbol of the Sun and of the victory against evil, darkness, and despair. We stand with the people of #Ukraine
Sometimes you just have to put some classics on the PCs path to glory.
Loading Comments...
%d bloggers like this: