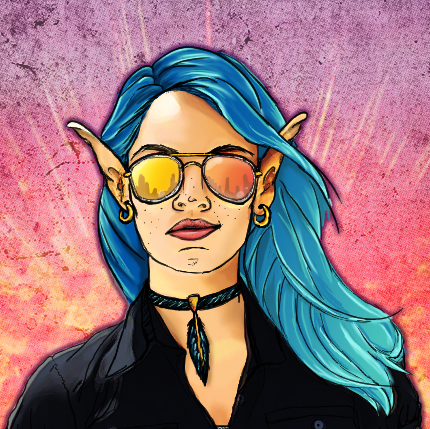 Here’s a snippet of information about me: I love drawing. I’m no pro, and definitely nowhere to call myself an illustrator but I thoroughly enjoy the process.

Here’s another: I haven’t drawn anything in ages! For many reasons; mainly, my life’s been in a bit of upheaval for the last couple of years. Also, my hands hurt when I draw.

However, Jakub and I are starting a new Shadowrun campaign soon, and I’ve been putting together my character for the last couple of weeks. Working through “20 questions”, I realised I have no idea of how she looks like and what’s exactly her personality, so I decided to just draw her and figure it out as I go.

But first! Let me tell you about the new campaign

As you may remember, Jakub was running a ‘vintage’ Shadowrun campaign for me and a couple of other internet friends (I wrote quite a bit about it on my blog; here’s the epilogue); we were running the Shadows in Chicago in 2053 and 2055. It was so much fun, you guys!

As the campaign ended, we started thinking about the new one. It’s hard not to play. Being a fan of old school Shadowrun, Jakub decided we’ll start the new campaign more or less where we ended the previous one: May 2055. This time in Denver: The City of Shadows.

If you know anything about Shadowrun, you know that Denver is a city split between six countries; each of them has it’s own sector there, they govern the city by committee (it works about as well as you may expect it), and there’s more borders, border crossings, and border patrols than Stuffer Shacks. It’s a melting pot of cultures and languages, with multiple corps and governments fighting one another in the Shadows, with political and economical intrigue – in short, a perfect place for shadowrunners.

It only makes sense to start as not a shadowrunner.

I don’t want to spoil too much – Jakub and I will be doing some announcements about the campaign soon – but our characters start definitely not as full-fledged runners; they’re just people trying to live their lives in a crappy neighbourhood (Aurora Warrens, anybody?), between three gangs, outside of law, SINless… Just check out the map Jakub made for the ‘hood.

See those ‘Best Western Apartments’? That’s our home, right on the border of Aurora Warrens, CAS sector, and UCAS sector; on Cutters’ turf – but our grocery store / shadow market is on BB’s, and the They Eights just want to loot it all…

This will be fun. We’ll be streaming/recording the show and we’re happy to have viewers participating in our written RP on Discord, so stay tuned and join us!

Back to the regular programming

Tomorrow’s a Raven-mentored B&E specialist (I know, I have a type). She made some bad decisions as a teenager, and now she’s living in the Warrens with her criminal SIN and prison time in the books. Having no chance of ever getting a legal licence for practice of magic, she decided to stay away of CAS / UCAS jurisdiction and just do what she likes freely – even if it means living in a decrepit house, paying ‘rent’ to gangers, and patching their bullet holes when necessary.

And then she goes home, sits down with her books, studies enchanting, and chats with her virtual pet.

I started with finding a reference photo; let’s be honest, I ended up tracing it a bit – I really haven’t drawn anything in ages! The photo is public domain though, so we’re good on the legal front! Gave her elven ears and a confident smirk – the personality started to emerge, so I just went with it.

Up next: colours. I tend to make my Shadowrun characters rather plain. Standard hair colours, no weird eyes, almost exclusively human, well prepared for blending in and disappearing in the crowd. Mostly, because I hate the design and style of old-school SR (and the new one’s not too good either).

So, I tend to make characters that are normal. That, of course, makes them stand out in the crowd – because of dressing like today’s normal (I’m basic, I know). I mean, these were my three last SR characters:

See the crazy hair in the last one? (It’s Kay-O, Phase’s daughter for my ShadowHaven games in 2080s; timelines fit, so… Yes, of course she’s an B&E specialist.) That’s my level of crazy.

I’ve decided to go really crazy. Blue hair, here I come! I actually had my hair dyed blue and green at one point; I don’t know why my PCs are more conservative in their looks than I am. Probably because I don’t need to hide from the police.

I have to say, a mix of gradient on the hair and four different colours for shadows/highlights worked quite well. I put a feather on her neck, as a symbol for her mentor spirit, and embraced the mirror shades as a symbol of Jakub’s GM style.

In the end, I made a full character card, with a catchphrase and explosions. Just just seemed fitting.

Hopefully, the rest of the players (we have a really cool team!) will make their characters soon, and I’ll get to draw some more of these.

Stay tuned for our Denver campaign coming up soon!