A Tale of Two Campaigns: Shadowrunning in 2053 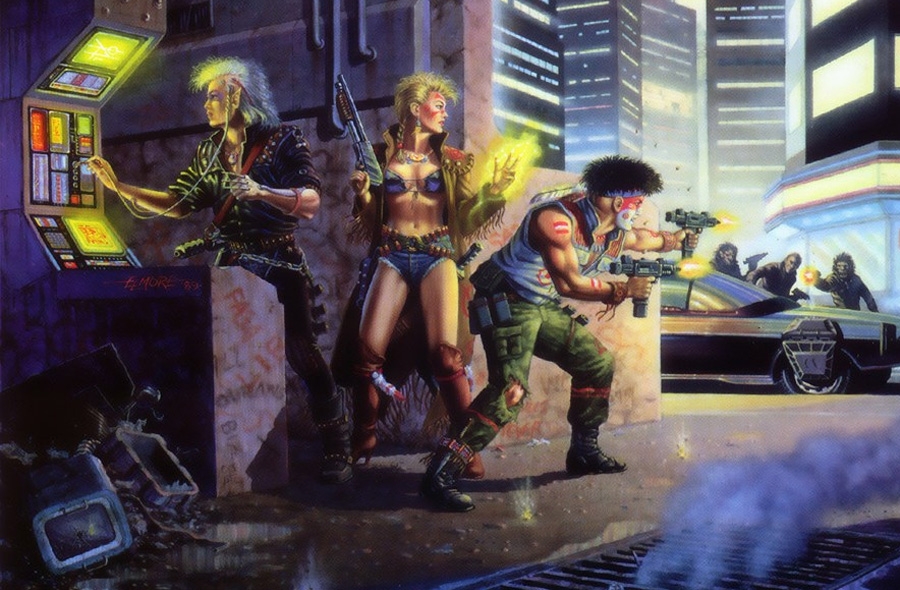 Chicago, 2053, March. A group of fresh-from-the-oven shadowrunners just tries to make a living.

We started a campaign in August last year, and we’re slowly approaching the end of the first part of it. Our GM decided that he’s not a mere mortal, and decided that he’s going to run not one campaign but two at the same time, building this amazing, detailed tapestry of the world for us. So, the eight of us players split into two teams and we started shadowrunning in the same city and the same time, deciding that we’ll just see how the story unfolds. Maybe our teams will meet, maybe we’ll be competitors, maybe we’ll be allies, maybe we’ll just shoot down one another in a dark alley.

Playing with the new classic combo of Discord+Roll20, each team got their own in-character and out-of-character text channels, as well as Chicago-Shadowland-BBS, everybody’s favourite bulletin board. I mean, where else would you be able to talk to Kane while he’s burning down your city during the full-blown gang war? Where else you get to see The Big D, The Laughing Man and The Lady Of The Court make fun of you and each other? Where else you get to talk to Dodger about Blackwing going with clipped wings back to Tir after you threw a grenade into an elevator he was in? Where else your Data Liberator Team Decker could make a mistake of suggesting he knows something about the whereabouts of half a ton of novacoke (its disappearance was a reason for Chicago gang wars), resulting in dozens of deaths (including his own) and the utter destruction of his team? Fun, I tell you.

(Once we actually got to know each other in-character, we also got a text channel for cross-party talks. We became allies, in the end. It’s not the end yet, I guess – but I don’t really see that alliance breaking down now).

The point of playing in the 2050s was to have some fun with the original campaigns: so far, we did Dragon Hunt, Queen Euphoria, Total Eclipse, Bottled Demon, Elven Fire, and we’re currently somewhere in Harlequin. I don’t know exactly where, as for obvious reasons I haven’t read the adventure while playing through it. We’re literally in the middle of the Amazonian jungle right now, so I’m guessing drek is about to hit the fan. Also, I hate Ehran the Scribe so much. As we’re in Chicago in 2053, both Universal Brotherhood and Bug City are approaching fast. Our characters might not yet be aware of what’s coming their way, but the players are already reasonably anxious.

Shadowrun being Shadowrun, the game is rather… lethal. We started as two teams of four characters each. After nine months of playing, the number of still living characters created for session zero is… one. And it’s mine. Cue maniacal laughter, ending in sobs. She lost a lot of friends along the way. Some players left on their own (this is rather time-consuming campaign, with weekly sessions and a lot of things going on on text channels between sessions), one was kicked (for metagaming and spoiling other players’ fun), some characters just died and had to be replaced with new ones. If I’m counting correctly, we had 12 players and 17 characters in the campaigns so far. And about a million of NPCs, each one of them unique, because our GM is definitely not a mere mortal.

After eight months of playing in two teams, however, we decided to mix things up – mostly because some people just grew too busy with their life to spend 10+ hrs weekly on an online Shadowrun game. So we parted ways for the time being (as in: feel free to join us back when you have time), and we’re coming to the close of the first part of the campaign as a group of four, two players from original Team A and two from Team B. And it’s a blast.

We did work together occasionally in the past (there was this beast terrorising gangers and innocent occupants of Black City; the ganger part actually was due to Your Friendly Neighbourhood Vampire, Red, but we only learned that later), then started becoming friends and borrowing some characters for guest appearances from one team to another (we only had one decker between the eight of us, and one proper first-liner). These days, though, with only one team fighting against injustice (or just Ehran the Scribe) for money, the group of four became really close. That is: we almost know each other’s real names in game, and that’s not that common in the Shadows. Dying for your comrades-in-arms? Sure. Telling them your name and where you live? Well… Let’s do some more runs together and then we’ll see.

I might be talking more about this campaign later. Wait. I will be talking more about this campaign, as I live and breathe it for the last nine months, and it’s epic. When combining notes from both campaigns, we realised that we have a total of 250 pages of Google Docs. We moved to Scabard now, with all the current things after joining the teams, and I fully expect that transferring the old notes will take about two months of hard work; if somebody ever finds time. I love Phase, my character, who still didn’t get to her backstory properly as there’s just so much going on in Chicago, and she can’t put everything on a back burner to just go and solve the mysteries of her past. I love other players’ characters – even the new ones are properly fleshed out.

Also, our GM is not a mere mortal who somehow keeps track of the whole world without a single piece of paper or notes. He just does it in his head and we’re yet too see a single inconsistency. He’s currently working on his own tabletop RPG game, by the way, and it’s going to be glorious.

One Comment on “A Tale of Two Campaigns: Shadowrunning in 2053”