It’s not that I’m forced to write about Critical Role all the time, but it somehow seems like the most enjoyable part of the RPG world these days. And they’ve just announced that the artbook will be available on 9 November, and the campaign’s over, and the comic book is just brilliant.

Second issue of the Origins comic book is available since today on Darkhorse and everywhere else where you can get digital comic books. I got mine this morning od Darkhorse’s website, and then spent several hours at work, not really being able to read it yet. Exercises in patience are a terrible thing, especially when you’re a proud owner of three-second patience window.

The book – again, 27 pages – takes us on a road parallel to the one travelled before. Namely, to the path of Scanlan Shorthalt and Grog Strongjaw (and the rest of their adventuring party), as they’re raiding and looting an ancient temple, somewhere in the swamp. That, quite cleverly, sets the characters on the road that will surely get them to Vax and Vex, as they’re clearly doing the same quest, just from another end. (Tiberius and Keyleth are heading in the same direction!)

Future Grand Poobah and Bard Extraordinaire are a part of an adventuring group, comprising them, a wizard named Vash, a knight and a cleric. A bunch of assholes, according to Scanlan. After clearing the shark-men temple and recovering relics, they get back to Stilben, and visit an alchemist shop (yes, the same as featured in issue one). An assassination attempt later (looks like Vax was right about that), they visit the tavern. The end.

Well, no. Surprisingly – one would expect a lot of action and shenanigans from the main duo – half of the issue is a series of social encounters. Intriguing? Yes. Entertaining? Yes. Tense, surprising and randomly changing directions? Definitely. It requires a talent to write the action scenes, but even greater to write – and draw! – long conversations in comics so they captivate the reader entirely. Here’s the thing: a big round of applause for Olivia Samson for drawing the seemingly static, repetitive panels with talking characters with such intelligent, subtle twist, that I haven’t even noticed them in the first read.

Scanlan’s chat with Tiberius takes up four pages, and almost all of the panels look like this:

Just half of a goliath, a gnome and a dragonborn by the bar, chatting, barely moving. And then you’ve got the bartender, who basically goes through all stages of grief in the background. It’s easy to miss when you concentrate on the dialogue (sparkling!), and the scene has a very cinematographic feel of a one, long take with almost no cuts whatsoever, but the stillness and repetitiveness basically forces your mind to look for the details that make the images different. And boy, they are delightful.

The second issue is great. As the first one was based on action and investigation, this one is calmer; combat encounters are quick and deadly, and character interactions take up much more space. Maybe because the twins were quite in sync, maybe because it’s sort of expected when the main character is a charismatic gnomish minstrel. 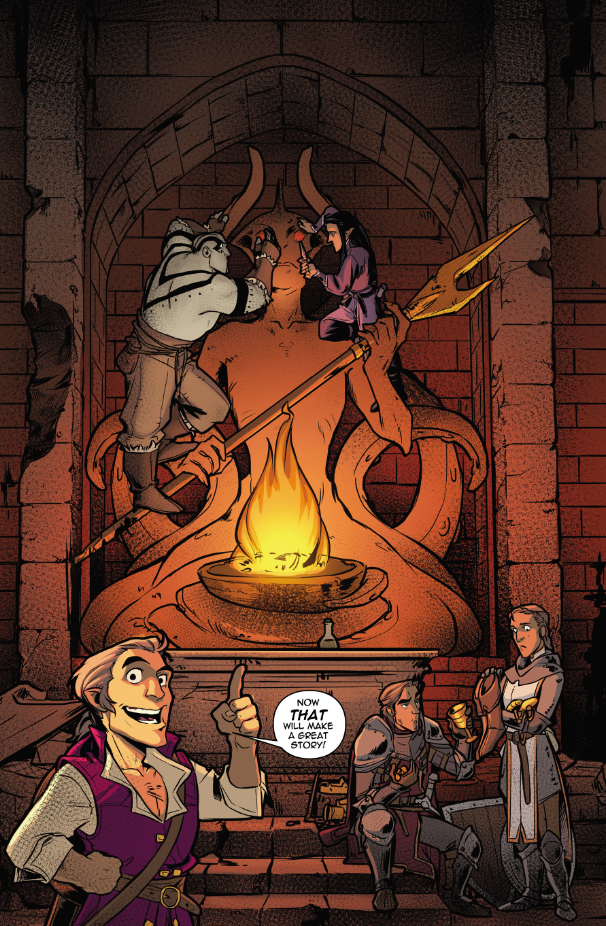