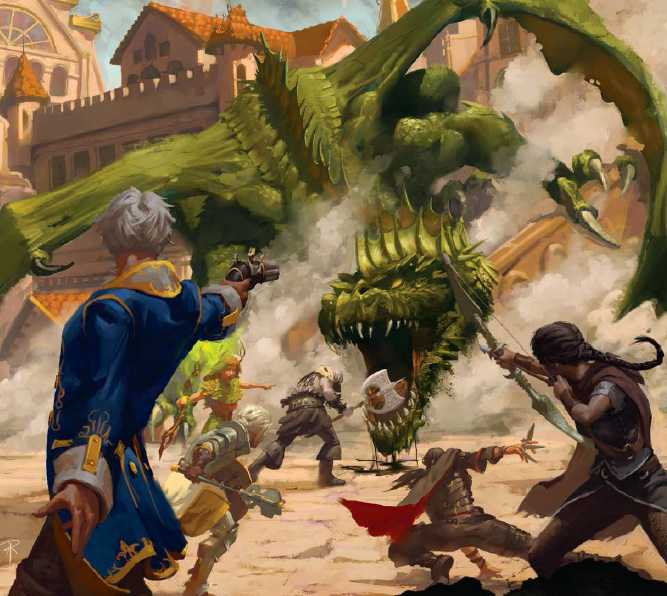 Disclaimer: I’m a big fan of the show. I’ve joined the bandwagon around episode 30 (or rather: they got to episode 30, when I started watching the first one), and spent many work hours with a small Youtube window pinned in the corner of my screen. Now, after 114 episodes and emotional, heroic finale to the campaign, I’m left awed, amazed, and a bit sad. Would be probably sadder, if not for the sheer amount of Perc’Ahlia fanfictions found and read in the last week.

The internet sensation of Geek & Sundry’s Critical Role has swept the nations and brought thousands of new players to the gaming tables. The incredible talents of Matt Mercer, DM of the group, and his voice-actor players, inspired masses of people to give RPGs a try – even if they don’t feel like doing all the funny voices.

As the game is (was! And will be, when they start a new campaign in the new year) set in the homebrewed world of Exandria, it was only logical that with the success of the show came the call for the proper description of the setting. And so, Green Ronin got to publish a book (cowritten by Matthew Mercer and James Haeck) that became an instant bestseller (technically, I suppose, it will be a fastseller, but let’s not be picky), forcing the publisher to close the pre-order phase ahead of time and prepare for the reprint even before the first run left the printing press.

Thanks to the great pre-order deal, it was possible to place an order for a physical copy and receive the PDF version for a small fee right on the spot. Which is exactly why, even though the physical copy has only been delivered to us last week, we’ve already managed to find a willing DM, play six sessions, and get quite accustomed to Westruun.

It’s only fitting that the Vox Machina should fight Raishan there. With no offence to Vecna and Briarwoods, she was by far the most interesting opponent (if not straight up villain) on their path, partially due to the screen time. The only thing that could make this art better is selfie-style Scanlan’s face in one of the corners.

The cover is protected by two types of varnish, with the art being matt and the black and burgundy vignettes made glossy. Unnecessary, possibly, but appreciated. The pages (all 144 of them) seem well bound and properly glued, with no obvious risk of becoming loose.

Internal artwork is exactly what could be expected – slightly uneven, as it’s done by several different artists, but great overall. Sharper, more digital illustrations coexist there with more traditional (or rather, traditional-looking) pieces, and though I personally favour the latter, the former are nothing to scowl at.

Kudos for including a proper fould-out map of the continent – it’s pretty, well drawn, includes scale reference (I’m looking at you, Legend of the Five Rings), and looks great on the wall. As it’s author, Andrew Law, was so kind as to write a great post on the creation process, just go there and read up. It would be slightly better if the poster map was folded with art inside, as the rubber glue used to keep it attached to the book leaves a bit of a dark spot on the artwork. It’s not very visible, but visible nonetheless.

The map (at least the most important part of it) is also featured on the inner cover, which is definitely a nice touch for quick reference.

Using the book is easy; between full-page content list, three-page index and just 144 pages of the book, it’s impossible to get lost.

History of Exandria is not complicated, and it’s fairly short. Though described only by a couple of the most cataclysmic events, it gives enough ideas for relics, legends and rumours, that extrapolating on it should not be a problem. It does, however, play an important role in the world. With the artefacts being literally Vestiges of Divergence, leftovers from the times when the gods were present on the Material Plane, it’s hard not to be interested in the times past. History of Tal’Dorei, one of the kingdoms of Exandria, not only shows off the hero of the land, Zan Tal’Dorei, and her influence on the world, but also delves into description of the events as seen on the show – the exploits of Vox Machina.

Quite clever thing is the section on The Secrets of Tal’Dorei – concise description of the pieces that make this setting unique. It is – I think nobody tried to tell people otherwise – a fairly generic fantasy setting, that will give casual D&D players no troubles to get accustomed to. Putting into one place all the things that define the setting – like the imprisoned gods or the start of the republican system – makes it easy to catch up on the most important deviations from the generic, and run the game without too much preparation.

The pantheon is based mostly on D&D/Pathfinder deities, with different names (licenced) and some tweaks here and there. It’s clearly written and concise, with useful commandments of each god. From my gaming experience, there’s never no god more fun than the Moonweaver (trickery/deception/illusions). She sure made my bard/warlock quite a delight – believing that her Archfey patron is actually a goddess is an easy way to get mixed in some stupid mess.

The chapter on races brings mostly some adjustments in the lore, not mechanics; the only exception being the Ravenites – tailless subrace of the Dragonborn.

The factions and societies bring a whole bunch of ideas, short NPC descriptions, and plot hooks hidden in the descriptions of the goals and relationships. From magical quasi-guild to the cultists of Vecna, there’s enough to keep the players busy.

The longest and most important part of the book, the Gazeteer is a travel guide to Tal’Dorei. Each geographical region is described in more or less detail, and contains plot hooks for the adventures. It’s easy to use that as sandbox – truth is, wherever the players will go, there’s something interesting to see. Plot hooks range from melted cows to cataclysms to rescue parties to ancient cities overrun with ghosts. Again, perfect for the sandbox. However, if the party is travelling by foot and the DM is not a fan of telling them “two weeks of rather uneventful travel later you arrive at your destination”, there are some gaps that need filling. There’s a lot of empty plains and long roads. Obviously, Vox Machina haven’t visited all of Tal’Dorei, and it’s quite easy to see which parts of the kingdom were therefore detailed in author’s notes, and which were just outlined.

Even so, for such short book (and production process), Gazeteer is worth reading. The plot hooks are easily transferable to other settings, if preferred, and they work well enough to create an interesting world. It’s up to DM to pick, choose and adapt them into a proper story – on their own, they’re just sandbox-y ideas for the adventure, not full adventures.

My favourite part of all the D&D supplements is quite decent – definitely better than official D&D 5E Sword Coast Adventurer’s Guide which is a huge disappointment and I would thoroughly roast it if I had two weeks to spare.

We’re getting a Blood Domain for clerics, mostly based on enchantments – sadly, there’re no actual blood-themed spells in D&D 5E, but this domain makes sense nonetheless. It reminds me of the bloodbending in Avatar: The Last Airbender, and it’s not an unpleasant thought. Think more of “puppeteer” than “blood sacrifices”.

There’s also Path of the Juggernaut for barbarians, Runechild sorcerous origin, and Way of the Cobalt Soul – a monastic tradition for monks. I have a bit of a trouble with the last one: it allows players to learn aspects of their opponent in the fight: AC, vulnerabilities, saving throws etc. While I understand the “fluff” as it’s nothing we haven’t seen in martial arts films, it still have an aftertaste of metagaming, and it’s something I don’t like. It’s one thing to let players know that the lightning bolt doesn’t seem to affect their enemy, and another to tell them straight up: “immune to lightning, fear, poison and prone condition”. But, it’s just my opinion, and I’m sure there will be players and DMs who will embrace this ability.

New feats allow for long-awaited potion-drinking in bonus action (because come on, it’s just a small vial of liquid; it shouldn’t take a whole action), improved spellcasting (two spells in one round, yay!), and ability to attune to four items instead of four. I need them all for my brand-new cleric. Apart from those, there’s Cruel, Dual-Focused (two concentration spells at the same time!), Flash Recall, Gambler, Mending Affinity, and Thrown Arms Master. Fun!

What I definitely like the most, are the Vestiges of Divergence. Artifacts that can be handed out early in the campaign, scaling up with the character development, and becoming a true part of the character, not just a random piece of gear in the treasure hoard found when killing seventeenth dragon? Count me in, and give me the Spire of Conflux.

Couple extra pages covers the rules for accelerated downtime and ressurrection rituals (as the show proved, it’s so much better when there’s a chance of permanent death).

Oh, boy. Two things: descriptions of the different monster (or rather non-player) races place them well in the setting, giving each the context and some twists to better fit the world; stat blocks are pretty cool. I’m happy to see the stats for Ashari tribesfolk, and the Clasp members are definitely useful in this setting and outside of it. But there’s also a rideable celestial goat, and my World of Warcraft-loving heart cannot stress this enough. Next time I’m playing in this setting, I’m going to be a Kraghammer Goat-Knight. Add to that Vecna’s cultists and pumped-up orcs/goblins, and you’ve got a party.

It’s a very nice book. There’s a lot of interesting places to visit in Tal’Dorei, and all the plot hooks can be used as a base for a sandbox play, but – of course – it’s not a campaign. There’s no storyline, and it’s up for DM to create one. It’s also up to them to fill in gaps in this a bit sparsely populated world. I’m not entirely sure if this setting would work without the Critical Role show to support it – while definitely a work of love, it’s not entirely unique. It’s engaging, well written, descriptive and inspiring – but I think there’s more magic in Matt Mercer’s DM-ing than there is in the book itself. It’s a great read for the fans of the show, and could definitely be a stand-alone setting – but with at least twice the amount of pages.

Physical proofs of some of the stretch goals have arrived! They look so shiny! I can't wait until they land in backers' hands.
New occult book review on the blog! This time, a book endlessly useful for all modern magic systems - and a pretty good read for any modern witch.
The first Aphelion Toolkit prototype! The hex grid has multiple uses in the game (battle map, exploration, character progression, etc), but here's my favorite: quick generation of NPCs, scenes, items, even scenarios - pictured, a Rating 1 Deceit NPC: a beginner street thief or a snake's oil salesman! Add more dice for higher complexity, groups, treasure hoards, and whole story lines!
My first ever tarot deck has arrived! It's so beautiful, and I can't wait to use it, both for divination and for game design. I have a thing for corvids!
Take a hike through the dark forest and let yourself be lost! Mysterious lights, fey encounters, time loops, eerie silence, and suspicious rabbits... Grab a new Wayfarer's Deck on Double Proficiency website!
6 more pages of illustrations and Herbalist's Primer is finished! I am having so much fun with this entry to botany! #botany #bookstagram #sciart #illustration #plants #botanyart #rpg #roleplaying
%d bloggers like this: