D&D 5E: A Guide to the Published Campaigns 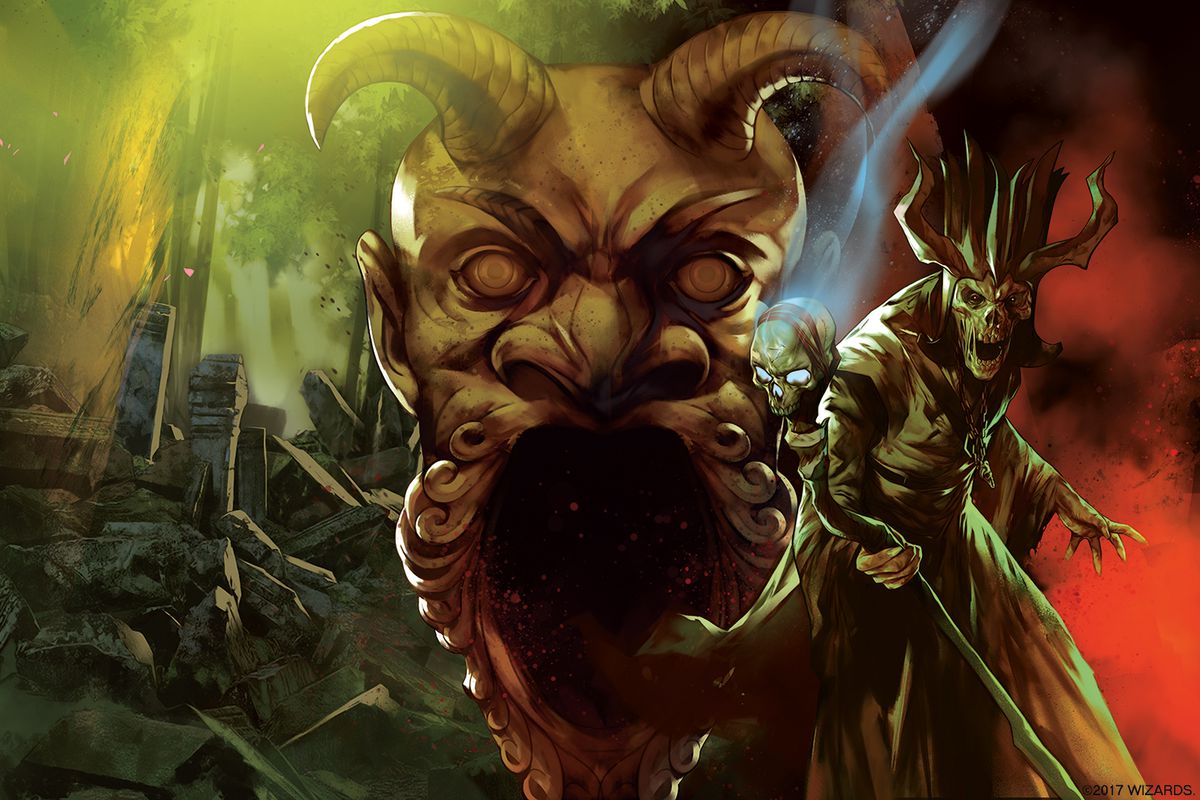 Lost Mine of Phandelver

Theme: Fighting goblinoids for the control of an ancient mine and its riches.

Plot summary: Centuries-old mine, previously held by dwarves and gnomes, and destroyed due to orc invasion, has been rediscovered. A trio of dwarves who stumbled across it is not the only party interested in re-opening the mine and seizing it’s riches. Players will be asked to escort some supplies but will quickly find themselves right in the middle of the power struggle. The winner will take the Wave Echo Cave and all the magic it has to offer.

What to expect: Goblins and orcs being used heavily by a mysterious villain known as the Black Spider. First fights are relatively easy but will help new players to understand how the combat mechanics work. Although, it’s worth remembering that first-level characters are squishy, and a well-placed critical hit from a goblin can take them straight to the death’s doors. Storyline is quite straightforward, and might be boring for experienced players. There is enough place for NPC interaction in the town of Phandalin, selling and procuring any mundane equipment should not be a problem. After removing some miscreants from the town, players will spend some time looking for clues and following rumours in search of the Black Spider, and then delve into the final dungeon.

Hoard of the Dragon Queen

Theme: Fighting the evil cult to stop them from releasing Tiamat back to the Material Plane.

Plot summary: The Cult of the Dragon seeks the ways to free Tiamat from her hellish prison. As the cultist plunder and collect the hoard of treasure for their queen, players are caught in the dragon fire. Following the trail, they’ll discover the nefarious plot and start the journey which should take them to the end of this campaign and straight into the next one.

What to expect: The plot is rather straightforward, and doesn’t allow much free-roaming. They players will encounter mostly cultists, kobolds, drakes, and other reptilians, while following the clues and tracks leading them ultimately to the castle in the sky.

Extras in the book: Map of the Sword Coast, table with bonds allowing to connect the characters to the story, 14 new monsters, 4 magic items. The appendix covering the rules and monster stats is available online, so the campaign (together with The Rise of Tiamat) is playable without DMG and Monster Manual.

The Rise of Tiamat

Theme: The race against time (and the Cult of the Dragon) continues.

Plot summary: In an uneasy and fragile alliance with Red Wizards of Thay, Cult of the Dragon prepares the sacrifices necessary to bring Tiamat back to the Material Plane. It’s up to the players to stop the bloodshed, preferably by mercilessly cutting down all of the opponents.

What to expect: Even more drakes and dragons, and a slightly more relaxed design of the story. Players will be encouraged to interact with large organisations (Harpers, Zhentarim), and there’s enough space for side-treks, politics, intrigue and following random rumours.

Extras in the book: 11 monsters (including stats for Tiamat CR 30), 3 magic items.

Princes of the Apocalypse

Theme: A homage to 1E Elemental Evil – a cosmic threat to the world as the four elemental princes grow restless in their realms.

What to expect: Dungeon crawls, mostly. There’s 13 of them, and though they’re linked, the story is rather sandbox-y, allowing players to wander around the Dessarin Valley and discover things as they please. Note: if they stray from the path too badly, they might die a painful death. It’s a campaign for levels 1-15, and some of the areas are deadly for low-level characters. Prepare for fighting with elementals and colour-coded cultists.

Out of the Abyss

Theme: A bitter struggle to survive while jail-breaking from drows’ slave pens, with demon lords roaming around.

Plot summary: Escaping from the slave pens, the players will have to travel through Underdark, trying to survive or avoid both the random encounters and the drow pursuit. As the story unfolds, they get involved in the intrigue and power struggle between the denizens of Underdark, making and breaking alliances.

What to expect: Everything you could find in books about Drizzt Do’Urden, and then some. All of the demon lords, imagery inspired by Alice in Wonderland, and spiders. For a considerable amount of time, players have to take care of a plethora of NPCs – they’re not escaping alone. This also means that they have to run the NPCs, unless the DM is keen on adding ten NPCs to his/her/their workload. Equipping the players might be hard, as they start the campaign with next to nothing, and have to loot absolutely everything in hope to get some gear.

Extras in the book: Optional background features and bonds, 6 new magical items, 25 new monsters/important NPCs, maps (including the map of the Underdark), descriptions and stats for Demon Lords, pages with sketches and concept art.

Plot summary: In the suspiciously quiet village of Barovia, the window shutters are indeed, shut tight. The towering Castle Ravenloft, with its main inhabitant, Count Strahd von Zarovich, is looking closely at everything and everyone in his domain. Players, a group of adventurers just crossing the border, are both awaited and appreciated – but they probably won’t be too happy about it.

What to expect: Stormy clouds, enemies with necrotic damage and crippling vulnerability to radiant damage. Sandbox-y story that allows players to roam free through the lands of Barovia; after all, nowhere is safe. There’s enough time to get to know the NPCs, and with the main villain being several levels of power above the adventurers at all time, the feeling of dread for the lives of PCs and NPCs alike should ever-present.

Extras in the book: Lots of maps, including a poster map. 18 new monsters, 7 magic items, new background (haunted one), table of gothic trinkets, mini-adventure to level up characters from 1st to 3rd level (Death House), rules for the Tarokka Deck, handouts.

Theme: The war is brewing as giants brings destruction to the Northern Faerun.

Plot summary: For some reason, giants came down from the hills and mountains and terrorise the smaller folk, raiding the villages, stealing cattle and grain, killing without mercy, and plundering the coastal towns. The players must find a way to stop this war before it wipes out the whole humanoid population of the North.

What to expect: Sandbox-y story in pseudo-viking settings. If your players liked Skyrim, they will like this campaign: full of exploration, non-intrusive main plot (that is: it has to be done, eventually), and “Twelve Thousand Steps” staircases.

Extras in the book: Handy list of all of the NPCs in alphabetical order, giant runic alphabet, useful adventure flowchart, options to start the campaign at level 1 or 5, lots of maps, detailed description of the regions in the North of Faerun, lots and lots of random encounters, instructions on linking this campaign other already published, 17 magical items, 9 new monsters + new options for giants.

Tales from the Yawning Portal

Plot summary: In the Yawning Portal, an inn in Waterdeep, old adventurers tell the stories of the unique, incredible dungeons. The players can jump into any of them and start exploring. Death is not imminent, but is still a possibility.

What to expect: The book consists seven classic dungeons, taken from the most notable (and well known) adventures. They might be used as side quests, one-shots or even played one by one, as a dungeon-oriented campaign (in the world with magic abound, appearing magically at the entrance to and ancient temple should not crumble the suspension of disbelief). All of these classic adventures has been converted and adjusted to D&D 5E rules.

Extras in the book: 15 new magical items, 39 monsters, and 35 maps. Kudos for adding the page references for the specific maps on the Contents page.

Plot summary: The souls are being stolen – a death curse has befallen everyone raised from dead. Only destruction of the crystal hidden deep within the Tomb of Annihilation will free the souls and bring the resurrections back to the table.

What to expect: Jungles, dinosaurs, yuan-ti and volcanoes. This dungeon has been created as a modern version of Tomb of Horrors. Not an 5E update (that was in Tales from the Yawning Portal), but a brand new story with ambitions of becoming the new ToH. So far, so deadly. An abundance of traps and riddles, and riddles with traps, and Acererak at the end of the story. Players will die. And there’s a zombie-spewing zombie tyrannosaurus.

Notable magical items: Amulet of the Black Skull, Bookmark (+3 dagger), Ghost Lantern, Mask of the Beast, Ring of Winter, Scorpion Armor, Staff of the Forgotten One.

Extras in the book: New character backgrounds (anthropologist and archeologist), lost of random encounter tables, descriptions of flora, fauna and gods of Chult, 59 new monsters/important NPCs, 7 magical items, and some large, beautiful maps.  Players’ handouts have been released in a handy PDF file.