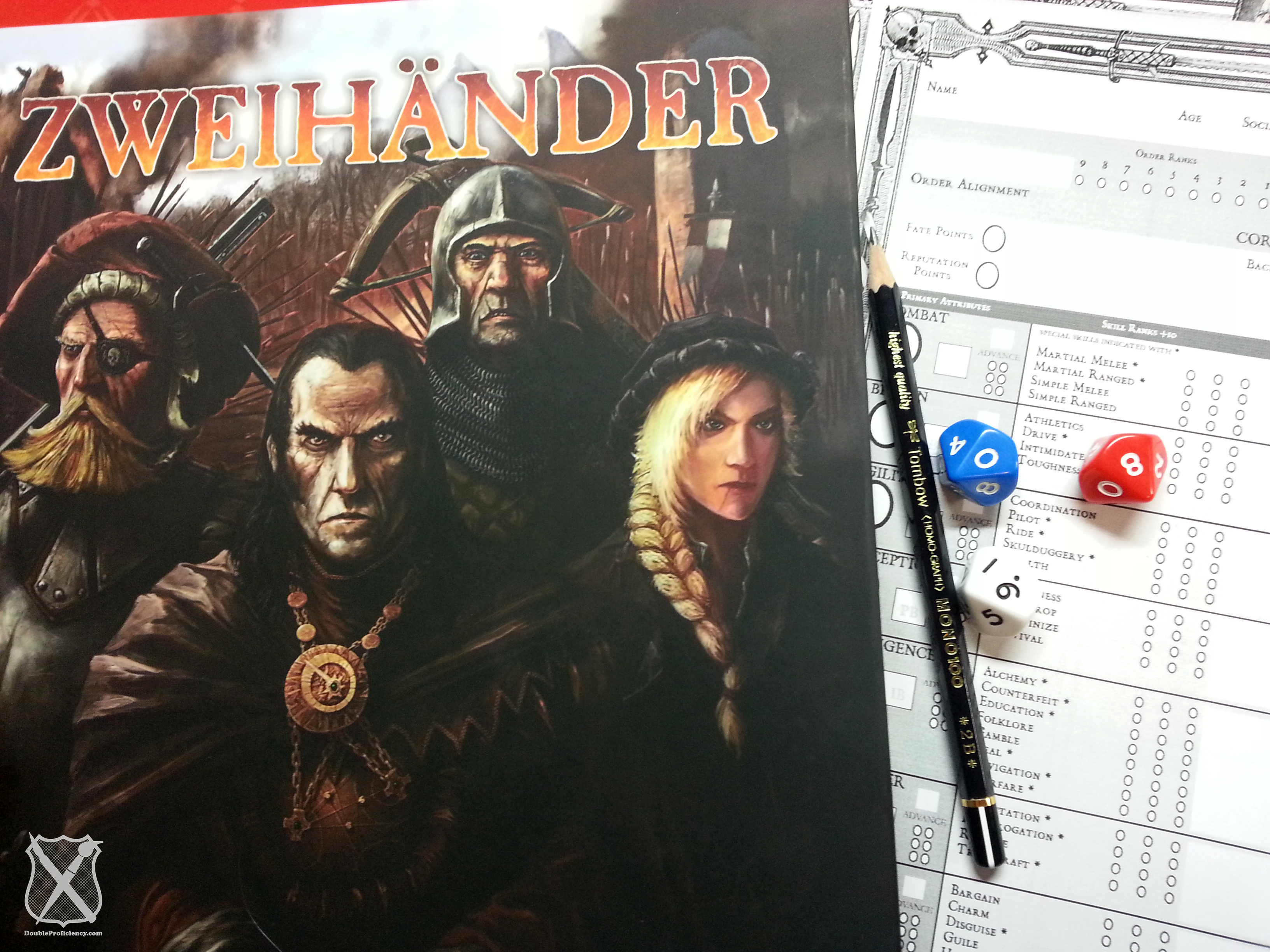 The Zweihänder RPG is finally here. After a hugely successful Kickstarter campaign (fully funded within 6 hours! Guess people really did miss Warhammer Fantasy RPG) and slightly delayed dispatch (a year or so – but for a good reason), the parcel was delivered and unceremoniously opened by a committee.

PDF, which was provided to the Kickstarter backers some time ago, looked promising – astonishingly detailed, with a clean, easily understood mechanic, and good artwork. Not Degenesis level, but pleasantly befitting the stylistic choices of the grim and perilous RPG. In print, I must admit, it looks even better.

Interior artwork was all made by one person, Dejan Mandic, and if I’m not mistaken, he has made a staggering 500 illustrations for this book, ranging from tiny symbols of the gods to double-paged artworks. And here’s that good reason for a year of delay.

Let’s get started then, shall we?

The cover has a very distinct feel, with matt finishing, muted colours, scarred folks (including, at a first glance, a Landsknecht, Sam Vimes, murderous chick, and Emhyr var Emreis), eyepatch with a skull, and a burning village in the background. Classy, with a touch of “We’ve all been there”. “Grim and Perilous RPG” tagline tells us “Yep, we’ve been there”. And well, I actually did miss that. Good job, Jussi Alarauhio.

The book was also available with an alternative cover, featuring another artwork of Mandic, but I think it’s low on the “grim factor” – I’d say it’s to pulpy and Warhammer-inspired.

The book is heavy. At 688 pages and just a tad bit smaller than A4, it can be safely used as a weight for flower-pressing. Thankfully, it seems reasonably well bound: sewn together in 32-page sections, and then glued. And they even added a ribbon as a bookmark. Paper is of a good quality and with a satin finish – no annoying glares af a gloss varnish, and readable even at an angle.

Thirteen chapters cover everything from the rules, through character creation, professions, skills, talents, equipment, combat, magic rules and spells, game master’s basement, bestiary and a intruductory scenario, “A Bitter Harvest”. It’s a standalone book: there’s no need to buy any expansions. There will be a Game Master screen released later this year, but the book itself should be more than enough to play many campaigns (I’m looking at you, Star Wars Roleplaying Game).

The book is well laid out, with legilible fonts, good font size (important when reading by the candlelight!), and an abundance of appendixes. It features a thorough content list at the begining, well-constructed index at the end, and several useful tables: damage condition tracker, chase scene tracker and a list of complications (where was this thing when I had to describe chase scenes in Wolsung campaign?), wilderness travel tracker and encounters, social intrigue tracker, cheat sheet of actions in combat, and the description of taints of chaos. There’s also the character sheer, 4 pages total, also available for download on the publisher’s website.

Introduction covers the standard disclaimer about using the book to make your own world however you want it to be, and changing the rules if they happen to take away the fun. There’s also a gender neutrality note, which is a nice gesture.

Rules section is plainly written and enriched by lots of examples. Everything seems to be based on D100, with classic Warhammer idea of “the lower roll, the better”. Doubles (11, 22, 33 etc.) generate critical successes or failures. What appears to be changed, is the Fortune Pool – a pool of tokens that can be used by the players to give themselves a bit of a smile from Lady Luck. Any tokens spent that way go to the Game Master who can then use them for his NPCs and monsters. Well, it worked in Deadlands, why shouldn’t it work here?

Character creation seems very enjoyable. It’s highly randomized, including a 50/50 roll for gender. And another disclaimer: Zweihänder makes no basic intellectual, physical or spiritual distinctions between females and males of any race. The same goes for transgender Characters, regardless of their gender identification. Any social inequalities in the campaign world should be adressed directly with your GM. It’s cute that after such a paragraph in chapter 3, they proceed to include a scenario about women abused, sold, enslaved, treated like tools to be used and discarded (p. 632), to provide a memorable playing experience by presenting players with a complex moral situation which cannot be divided into a ‘good versus evil’ or ‘chaos versus order’ (…) (ibid.). But, as I haven’t read the scenario in it’s entirety, I reserve my judgement – just pointing out the discrepancy.

We’ll look closer at the character creation, skills, talents and equipment later, when I actually get to finish the process instead of reading up on the professions.

Combat is quite straightforward – and deadly. I don’t think there’s a point in starting a campaign without a spare character in a tow, just in case. Introduction of Action Points allows for more flexibility in player’s turn, instead of bounding them with “action, bonus action and move”. There are called shots, chokeholds, counterspells and intimidation tactics – plenty to bring out the tactitian to the table.

Diseases, intoxication, sleep deprivation, injuries and infections (whole chapter 9) will make sure your character lives a grim and perilous life. And a short one.

Magic looks familiar, up to the chaos dice. At a first glance, it has the potential to be deadly for both the target and the caster. So, fun. I’ll be happy to share a more informed opinion as soon as I have it.

Game Master’s section offers the wide repertoire of tips and tricks, including the tables with ready descriptions of killing blows made with different types of weapons. Like that, for example: Your missile strikes the area between the shoulder and the chest, burying itself down to the fletching and protruding between the ribs of your foe’s back. Their knees buckle and they fall to the ground. A soft, sucking noise emanates from the wound in conjunction with a few brief, ragged, respirations. Then, all is still. Also, rules for chases, wilderness travel, social interactions, traps, madness and corruption.

The Bestiary is quite impressive: 163 pages of monsters, each of them with a corresponding portrait. I’ve seen whole books smaller than that. Covering everything from bandits, through chaos spawns, to vampires, it makes a good read.

The campaign, “A Bitter Harvest” looks suspiciously full of gender inequalities. However, I’m giving it the benefit of doubt, and will be reading it later, maybe even GMing. After all, rest of the book is so worth of praise, that I’m convinced the campaign will be a good read as well.

A quality piece of RPG rulebook. Not only aesthetically pleasing, but brimming full of grimdark fantasy with a couple of interesting tweaks and twists here and there. I can’t wait to read it properly (well, maybe not cover to cover, because of the page count). I wonder how it will look against 4th edition of Warhammer – but it definitely looks pretty good compared to the previous three.

← How to Draw Fantasy & RPG Maps, part 2: digital
How to role-play female characters →

Physical proofs of some of the stretch goals have arrived! They look so shiny! I can't wait until they land in backers' hands.
New occult book review on the blog! This time, a book endlessly useful for all modern magic systems - and a pretty good read for any modern witch.
The first Aphelion Toolkit prototype! The hex grid has multiple uses in the game (battle map, exploration, character progression, etc), but here's my favorite: quick generation of NPCs, scenes, items, even scenarios - pictured, a Rating 1 Deceit NPC: a beginner street thief or a snake's oil salesman! Add more dice for higher complexity, groups, treasure hoards, and whole story lines!
My first ever tarot deck has arrived! It's so beautiful, and I can't wait to use it, both for divination and for game design. I have a thing for corvids!
Take a hike through the dark forest and let yourself be lost! Mysterious lights, fey encounters, time loops, eerie silence, and suspicious rabbits... Grab a new Wayfarer's Deck on Double Proficiency website!
6 more pages of illustrations and Herbalist's Primer is finished! I am having so much fun with this entry to botany! #botany #bookstagram #sciart #illustration #plants #botanyart #rpg #roleplaying
Loading Comments...
%d bloggers like this: